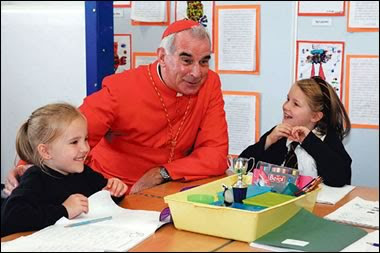 "Today’s Gospel follows Our Lady. She has just learned that she is to be the mother of the messiah and that her cousin Elizabeth is also to become a mother.

Mary, whose whole future had been transformed in the Annunciation, is so moved at the news of Elizabeth’s pregnancy that she immediately sets out for the town of Judah. The meeting of the two women is an event of great joy. What lessons can we learn from that scene?

We see the affirmation of the immense value of life from its very conception. The redeemer in the womb unites himself with all of humanity. By becoming incarnate in the womb of Mary, God raises to a new level the greatness of every human life.

The joy of that meeting holds out to us the message of delight that should accompany every pregnancy. With every life conceived God acts directly to create a new and unique human being, a person destined to life everlasting. Sadly, joy is not always the dominant emotion evoked by news of pregnancy in the world we live in today.

Today as we remember the Visitation we mark the “Day for Life” in Scotland, with a mixture of emotions, celebrating the gift of life but remembering also the tragic loss of life. Abortion is the theme for this year’s “Day for Life” which significantly is the 40th anniversary of the passing of the abortion act. In those 40 years the loss of life has been staggering. Around 7 million lives have been ended as a consequence of that one piece of legislation.

We were told that backstreet abortions were killing women and had to be decriminalised. We were told abortion would only be used in extreme cases. We were told medical scrutiny would be rigorous. We were told a – lies and misinformation masquerading as compassion and truth.


The scale of the killing is beyond our grasp. In Scotland we kill the equivalent of a classroom full of school children every day.
For many women abortion has become an alternative form of birth control. The lives of the babies involved are not at risk any more than the lives of their mothers are threatened by pregnancy. Abortions to save the life of a woman are almost unheard of. As a society we wilfully ignore these realities.


We need to build, once again, a society, which joyfully accepts new life. The abortion industry has impacted massively on the values of our society as its proponents continue to spread their culture of death. There is acceptance of a philosophy, which permits the destruction of children in the haven of their mother’s womb.

It is not easy to turn societies against the natural urge to protect young life. Yet care and concern for children is still very much alive. We are gripped with concern when news coverage of a child snatched or harmed appears on our television screens. We have ached over the disappearance of young Madeleine McCann in Portugal; together with her parents we know the inestimable worth of one precious life. Yes life is precious and precious also are those lives that are snuffed out in darkness hidden from the world.

Let us build up within our society a generation of medical professionals who are unwilling to cooperate in the slaughter. I call on our universities and medical schools to teach that all human life deserves protection. I call on our hospitals to end testing procedures designed only for targeting and killing the weak and infirm. I call on all politicians to answer one simple question: will you protect the right to life of all persons in our society from conception until natural death? And I call on you to hold these elected representatives to account.

For those unwilling to give this support we must be unwilling to give our vote. History will judge us on where we stood in this crucial issue. But there is a judgement more important than history. We shall all stand before the judgment seat of God.

I urge politicians to have no truck with the evil trade of abortion. For those at Westminster this means finding means of overthrowing the legislation, which makes the killing possible. For those at Holyrood that means refusing to allow our health services to participate in the wanton killing of the innocent. Peace cannot be built in the shadow of the abortion rooms.


In making this call, I speak most especially to those who claim to be Catholic. I ask them to examine their consciences and discern if they are playing any part in sustaining this social evil. I remind them to avoid cooperating in the unspeakable crime of abortion and the barrier such cooperation erects to receiving Holy Communion. As St. Paul warns us “whoever eats the bread or drinks the cup of the Lord in an unworthy manner will be guilty of sinning against the body and blood of the Lord. A man ought to examine himself before he eats of the bread and drinks of the cup.”

I would be failing as a pastor not to highlight the gravity of this situation not just to law makers but to anyone: mother; father; boyfriend; counsellor who in any way leads a mother to abortion.


There is much we can do. We can urge support for legislation which may not be perfect but improves the situation, legislation aimed at reducing abortion limits or bills ensuring that parents be informed if their children seek an abortion, can be supported as long as it is made clear that one is in principle against all abortions. Proposals to ensure women contemplating abortion are given full details about the physical and emotional risks to themselves and about foetal development should be backed.

We can work to ensure that the more light, which is shone on this terrible procedure the less acceptable it will be to our society. Signs of hope are appearing, earlier this month it was reported that many doctors are no longer willing to cooperate in abortion. They know, better than most, the humanity of the unborn. We need to support anyone who takes the same line believing always that truth will eventually triumph.

In returning to the scene of the visitation we see that in bringing our Lord to the house of Elizabeth, Mary brought great joy, even to inspiring joy in the unborn John the Baptist. As we carry Christ to the rest of society may our voices be a cause of joy for the unborn in our society."
at June 01, 2007

I have copied this and put it in my own blog too, following a previous post I did on the articles in yesterday's Independent.

I am still trying to work out why supporting easy abortion is "progressive" and promotes human rights.