Church defends and promotes the dignity and holiness of the family, says Pope 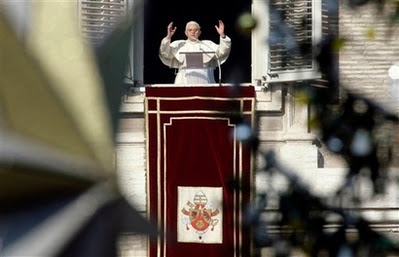 At the Angelus yesterday Benedict XVI greeted the participants in the celebration of the family in Madrid sponsored by the Spanish Church; he asserts that the ‘good health’ of the family helps society’s growth.

“Contemplating the mystery of the Son of God who came into the world surrounded by the affection of Mary and Joseph, I urge Christian families to experience the loving presence of the Lord in their life. At the same time I urge them to bear witness before the world of the beauty of human love, marriage and family, finding inspiration in Christ’s love for mankind. Based on an indissoluble union between a man and a woman, it [the family] constitutes the privileged sphere in which human life is welcomed and protected, from its beginning to its natural end.”

In a veiled criticism of the Spanish government, which has legally recognised homosexual unions and has decided to eliminate religious education from schools, the Pontiff added: “Parents have the right and the fundamental duty to educate their children in their faith and the values that give dignity to human existence. It is worthwhile to work for the family and marriage because it is worthwhile to work for human beings, the most precious being created by God.”

Earlier Benedict XVI mentioned the significance of today’s celebration, the Feast Day of the Holy Family. He said: “In accordance with the Gospels of Matthew and Luke, let us look at Jesus, Mary and Joseph, and worship the mystery of a God who chose to be born from a woman, the Holy Virgin, and come into this world the way all men do. This way He sanctified the reality of the family, filling it with divine grace, fully revealing its vocation and mission.”

The Pope mentioned important teachings by the Second Vatican Council on the family. “Husbands and wives find their proper vocation in being witnesses of the faith and love of Christ to one another and to their children (cf Lumen gentium, 35). The Christian family loudly proclaims both the present virtues of the Kingdom of God and the hope of a blessed life to come” (ibid).

In remembering John Paul II for whom “what is good for people and society is strictly connected to the ‘good health’ of the family,” Benedict XVI reiterated that “the Church is committed to defend and promote the ‘the holiness and to foster the natural dignity” (Gaudium et spes, 47) of marriage and the family.” 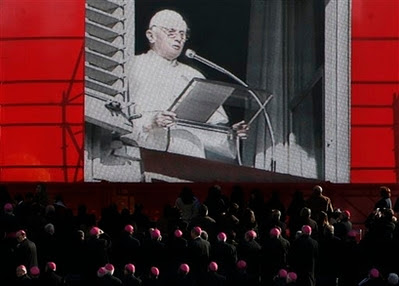 Bishops look at a giant screen displaying the Pope Benedict XVI speaking during the traditional Sunday noon Angelus prayer, live hookup from St. Peter's Square, during a rally with tens of thousands of Spaniards filling downtown Madrid called to defend family values, Sunday, Dec. 30, 2007. The Spain's Socialist government has angered the Roman Catholic church by legalizing gay marriage and making it easier for couples to divorce.
at December 31, 2007

"a rally with tens of thousands of Spaniards filling downtown Madrid..."

Tens of thousands? Nice try by that news agency. In fact, it was an incredible occasion, and there were between 1.5 and more than 2 million people. Imagine this for a country with 40 million inhabitants. It was truly a historic event, and makes me quite proud of our Spanish brethren.

Needless to say no coverage on the BBC

Yes. But having had a look at the Compendium of Catholic Social Teaching, I think we laity should be doing more to look at the damage that our economic institutions do to the family, and thinking about ways in which families could be better nurtured.

Just two examples illustrate the problem. It was a Conservative minister who suggested that the unemployed should get on their bikes to look for work. Not good for families to be scattered all over the country. Then there is the price of housing, in reality the price of the land that houses stand on. One salary used to be enough to pay, now it takes two, so both parents have to go to work whether they want to or not.

Although Catholic Social Teaching is deficient, it gives enough leads to enable us to develop alternatives to rapacious capitalism and the fashionable acquiescence in notion of the economy as an all-consuming monster.