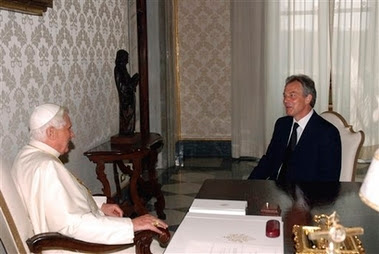 Pope: "No, that was not the correct answer to the first question. It was God, not not the spin doctors who made you."

Blair held talks with Pope Benedict XVI, with the Vatican stop on his farewell tour fueling rumors that he plans to convert to Catholicism. The two men met privately for 25 minutes and then were joined for further talks by English Cardinal Cormac Murphy-O'Connor.
A Vatican press office called the audience a normal meeting between the pope and a government leader. Blair leaves office on Wednesday.
The statement, issued after the talks with Benedict and a separate meeting with Secretary of State Cardinal Tarcisio Bertone, said there was a "frank" assessment of the international situation, including such "delicate" themes as the Middle East conflict and the future of the European Union

The Pope: Name two of the four sins crying to heaven for vengeance.

Blair: Wilful murder and the sin of Sodom.

I wonder if they discussed Mrs Blairs condom promotion policy

Cormac joined them and also struggled with the Pope's questions.

The Holy Father should have spoke two words to BLIAR Anathema Sit!!!!

I am a mere man, who attempted to activate public service at the highest level, a crowd of third rate plebs posted stuff about me on RC internet sites: wow, how connected, how inteface, how cool,

"how interface"?
What does that mean?
Why dis God make him?
Certainly not to spin,and lie, and conspire with Bush to invade Iraq with such ineptitude that nothing but havoc and chaos are brought about.

Blair: Y'know, I've been savaged by Jeremy Paxman a few times, but when I came here I didn't expect a kind of Spanish Inquisition.

The Pope: No one expects the Spanish Inquisition!

@"Anonymous"
I am a mere man, who attempted to activate public service at the highest level, a crowd of third rate plebs posted stuff about me on RC internet sites: wow, how connected, how inteface, how cool,

a crowd of third rate plebs

Nice. Thanks for that, Lord Snooty.

wow, how connected, how inteface, how cool

Well, yes that is the general idea of the internet, to, you know, connect people who can exchange thoughts and opinions and sometimes, invective.

I am a mere man

He's the Prime Minster, for heaven's sake - an elected representative. If he couldn't take a joke he shouldn't have joined.


"Anonymous"
How brave - the man/woman with no name.

Even amateur exegesis of the Genesis story reveals that the 'sin of Sodom' refers to the breaking of the laws of hospitality, not buggery. I wonder why catholics are so obsessed by the bedroom habits of homosexuals.

"I wonder why catholics are so obsessed by the bedroom habits of homosexuals."
St Paul talks of some sins should not even be mentioned, those are the sterile acts of homosexuality. Catholics are concerned about sexual activity because it pertains to the family, the family is central to society.

Fed-up with the Sanctimonious

You don't have a monopoly on righteous anger