Communion in the hand: the future 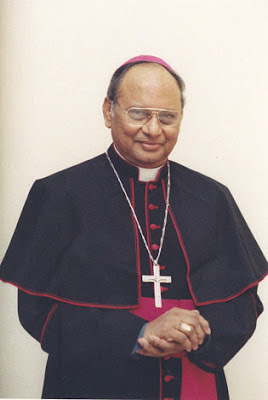 Archbishop Malcom Ranjith, the Sri Lankan number two at the Congregation for Divine Worship and the Sacraments, is expected to take over from Cardinaal Arinze as the head of the Congregation later this year, so what he has to say is of tremendous interest. This is from NLM:

Bruno Volpe, of Petrus, has interviewed Msgr. Albert Malcom Ranjith, Secretary of the Congregation for Divine Worship and the Discipline of the Sacraments. Here is my translation:


B. Volpe: Your Excellency, unfortunately Holy Mass, in Italy and in various other parts of the World, continues not to be celebrated as it should be, with priests putting themselves at the centre of attention and inventing impromptu texts and rites that are absolutely not loyal to the Magisterium.

Msgr. Ranjith: It is true, and I think it is really sad that some priests, fortunately not all, continue to abuse, with inexplicable extravagancies, the liturgy which, it should be remembered, is not their property but belongs to the Church.

Volpe: Would you like to make a public appeal?

Ranjith: I remind these priests that they must, and I stress must, respect the official liturgy of the Catholic Church. Enough with the abuses and the personal interpretations: Mass is not a spectacle, but sacrifice, gift and mystery. Not coincidentally the Holy Father Benedict XVI continually reminds us to celebrate the Eucharist with dignity and decorum.

Volpe: We come to a practical case. Some priests indulge in homilies excessively long and not always attuned to the readings of the day.

Ranjith: First of all I think that a good and healthy homily should never exceed 8-10 minutes; having said that it is necessary that the celebrant studies in depth the Gospel of the day and always stick to it, without flourishes or unnecessary turns of words. The homily is an integral and complementary part of the Eucharistic sacrifice, but must absolutely not dominate it.

Volpe: Your Excellency, let us come to the question of Communion in the hand: What do you think about it?

Ranjith: I 'simply' believe that this practice needs to be reviewed. How to do it? To begin with, a good catechesis. You know, unfortunately, many are not even aware of Whom they receive in the Communion, that is Christ, and so approach the Eucharistic banquet with scarce concentration and very little respect.

Volpe: Specifically, what needs to be done?

Ranjith: We need to recover the sense of the sacred. I speak only for myself, but I am convinced of the urgency of reviewing the practice of Communion given in the hand, returning to giving the particle to the faithful directly in the mouth, without them touching it, reinforcing thereby that in the Eucharist there is really Jesus and that everyone must receive Him with devotion, love and respect.

Volpe: Would it not be appropriate to return to kneeling at the moment of Communion?

Ranjith: I think so. This gesture would represent a true act of respect towards the gift and the mystery of the Eucharist.

Volpe: But some, even inside the Church, seem to express “embarrassment” only at the idea of seeing restored kneeling before the Blessed Sacrament.

Ranjith: Beyond the office I occupy in the Vatican, as a Catholic I ask myself and wonder: why be ashamed of God? Kneeling at Communion would be an act of humility and recognition of our nature as children of God.

If we are to kneel we will have to have the Altar Rail put back,some of us need something for support.
Communion on the tongue is certainly the "healthy option"after we have been shaking hands.

I suggest that the good Archbishop has little pastoral experience in the matter of EMHCs and their services to the sick of a parish. If it is determined that the tongue is a more worthy member of the human body to receive the Host then anyone handling the sacred species with the fingers is immediately doing something wrong!
I cannot for the life of me see that this part of the human body is more worthy that that part!!
When Jesus handed out the broken bread (His body), He did not place it on the tongues of the Apostles (or, anyone else who was present at that Last Supper). Were there others present at the Last Supper? I am convinced that there were.
Was Our Lady present?
We do know that the two non-Apostles who walked with Jesus after His resurection, to Emmaus, recognised Him in the breaking of bread!
So, if they recognised him in that action, they must have seen it before!!
Surely!!
They are not recorded as being present at the Last Supper but who is to say that they were not?
You cannot recognise someone or something if you have never seen them or it before!

Communion in the mouth is a great idea but we have to be shown how to do it. For some of us, we just weren't taught that way. I tried for the first time to receive communion in the mouth on Ash Wednesday. I got very confused, the priest half missed my mouth and then l said Amen after l had received the communion. I think l would be too terrified to try it again incase l got it wrong.

Thank God for the good Archbishop.
'Kneeling at Communion would be an act of humility and recognition of our nature as children of God' - nothing else needs to be said.

You have missed the point of the argument. This is not primarily an issue of health but of re-emphasizing the scared character of the priesthood that has been destroyed by the post-conciliar excesses. The practice of communion on the tongue is not something to belittle us but emphasizes our humility in receiving the Holy of Holies - outward humility breeds inward humility. We are to receive Holy Communion, not take it as it were some mere piece of bread.

How I empathise with Clare. Having found a parish where it is possible to receive Holy Communion on the tongue, I was so nervous on the couple of occasions that I made up my mind to do this, that I no longer receive in this way.

I have wanted to revert to receiving in this way but after so many years find I am unable to. On several occasions I have decided to do this but at the last minute, in the 'queue' for Communion I have had to change to accept Communion in the hand.

I have thought a lot about this and hope one day to overcome my nerves. It is heartening to know there are others who feel the same way.

A very timely reminder from Archbishop Ranjith that the Mass is not a spectacle, it is a sacrifice.

Priests, of all people, should not attempt to turn it into a spectacle, with their liturgical improvisations, extravagances and emphasis on self.

This is all very wrong.

It is not a memorial meal, or a festival or a jamboree (though you could easily think so, if you saw some liturgies).

Priest and people are united in worship at the foot of the Cross, as it were.

They are there to worship God, not themselves.

Those who exhibit such a casual and irreverent attitude to the Eucharistic species very often are the same people who have little or no understanding of the sacrificial nature of the Mass.

They don't need any encouragement from modern liturgies !

I am not used to receiving communion in the hand and have never had a problem about that where I have visited. But this queueing business is undignified, however, there needs to be space between the altar rails when they are replaced, and the front benches.

Seemingly there are parishioners who need to be instructed but that should not take more than a few minutes then the disrespectful practice of communion in the hand can stop.

I understand that a declining number of priests can't do everything, but dispensing the sacraments to the sick and housebound ought surely to be the preserve of priests.

After all, when you request a home visit from your doctor, you don't want to see his receptionist !

I wouldn't want a visit from an Extraordinary Minister of Holy Communion.

He couldn't hear my confession or give me absolution beforehand, so what would be the point ?

Or is it assumed that we are all
in a state of grace nowadays ?

I'd like to encourage those who are uncertain about receiving Communion on the tongue - just open your mouth wide and stick out your tongue. It doesn't have to be as wide as you can and as far as you can, just far enough to expose your tongue. The host will stick safely to your tongue.

And don't worry about the response "Amen" - I know no priests who would not be happy to wait the length of an "Amen", and I hope you don't either!

Also, perhaps your situation would allow to you discuss this with the priest beforehand?

As regards not being taught do do this - that's a great shame. It happened to my eldest son, too - all of his class were taught that they must receive their first Holy Communion in the hand. I'm sure that's wrong, and thank God for Archbishop Ranjith and other bishops and priests who are encouraging communion on the tongue.