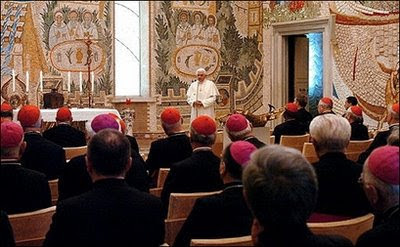 (CNA).- As Pope Benedict XVI and the members of the Roman Curia take part in Lenten Spiritual Exercises under the direction of Cardinal Albert Vanhoye, the L’Osservatore Romano published an article explaining the origin of this practice at the Vatican.
According to the article, the practice of conducting the Spiritual Exercises during Lent has its roots in the traditional Advent and Lenten preaching presented by the Preacher of the Papal Household, traditionally a post held by a Capuchin friar—currently, Father Raniero Cantalamessa.
However, it was Pope Pius XI who began the practice of the Spiritual Exercises.
In fact, a few months after his election to the papacy, on July 25, 1922, Pius XI proclaimed St. Ignatius of Loyola patron of the Spiritual Exercises, and on December 20, 1929, the day of his priestly jubilee, he published an encyclical on the Spiritual Exercises, “Mens Nostra”, in which he explained his decision to carry on the practice annually.
According to the Vatican daily, “since 1929, with only a few exceptions, the Spiritual Exercises have taken place each year in the first week of Advent. Paul VI moved them to the first week of Lent.”
They were suspended in 1950 because Pius XII did not want to interrupt the celebrations of the Holy Year, in 1962 when Blessed John XXIII preferred to have a personal retreat, and in 1963 when Paul VI did not want to interrupt the second session of Vatican II. It was then that he decided to move them from Advent to Lent.
“The preacher of the Spiritual Exercises is received in a private audience with the Pope at the beginning and at the end, and the preaching generally does not last longer than half an hour,” the article indicated, revealing an interesting anecdote. Once, a Jesuit preacher continued on for several minutes past the allotted time, getting the attention of a friendly Pius XII, who not only asked him to finish but also told him that brevity was important in order not to compromise the efficacy of the discourse, in accord with the recommendations by St. Ignatius himself.
The Exercises are always held in the chapel on the second floor of the Apostolic Palace. Until 1988, it was called the “Matilde” chapel, but during the Marian Year of 1987-1988, Pope John Paul II re-named it the “Redemptoris Mater” chapel.
Between 1997 and 1999, the retreats took place in the Clementine Hall while the chapel was being renovated. L’Osservatore Romano explained that in Redemptoris Mater, “on the right side of the altar is the small San Lorenzo oratory, which is accessible from the Pope’s apartment. The Pope attends the Exercises seated in the oratory and out of view from the rest of the participants, for reasons of discretion and to simplify the ceremonials.”
Only at the conclusion of the Exercises does the Pontiff enter the chapel and address a few words to those present.
Posted by Fr Ray Blake