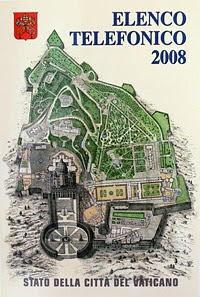 CNS
An updated Vatican phone book was finally released this month. Strangely enough, it looked thinner than the last one.

In fact, the 2008 elenco telefonico lost 61 pages, almost 30 percent, from its previous edition. What did they cut out? The answer was apparent to anyone who opened it: most of the names were gone from the listing of Roman Curia offices.
Instead, the phone book now provides names and numbers only for the top three officials of each department. The rest of the Curia did a disappearing act.

Naturally, journalists were upset. We spend a lot of time thumbing through the phone book when we need to contact potential sources, and this seemed to be saying: Don’t bother.

And what about Vatican employees who need to exchange information with other departments? In a world not known for cross-communication, the change made it even harder to navigate the labyrinthine Vatican bureaucracy.

It also meant the six nuns at the Vatican switchboard are going to be busier, as more and more callers go through the Vatican’s main +39.06.6982 telephone number.

I phoned the head of the Vatican telephone office, Brother Andrea Mellini (who is listed in the new book) and asked him why the change. He said it was a decision of superiors who wanted the phone book to be “more anonymous.”

Brother Mellini pointed out that numbers for most Vatican personnel continue to be listed in an alphabetical name-only section. So if you know precisely who you’re looking for, it’s still possible to reach him or her. But the phone book will no longer serve as a workforce directory for the Roman Curia.

If there are a lot of complaints, maybe they’ll return to the old format, Brother Mellini said. But he thinks the simplification could be a good thing, because it will make it easier to produce a new phone book each year.

If I was one of those six nuns I'd go on strike, because they obviously will be a lot busier. "Take this job and shove it" is something likely the good sisters will be humming.

I remember reading somewhere that in certain european quarters they deliberately try and be in efficient to keep a layer of protection around themselves, even in public service jobs -- and this seems to be one of those cases. Never mind the slavies at the bottom will now have to work 10 times harder.

As far as getting something "easier to print" only someone with brain death could over complicate a relatively simple task like that.