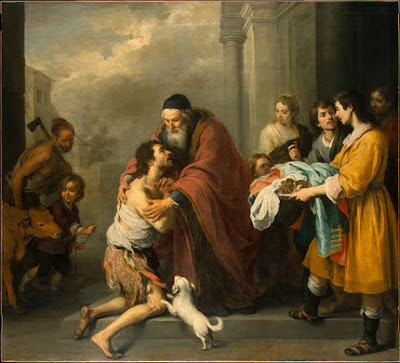 Brighton is place where people change lifestyles, it is mainly the young but this Lent I have had a spate of older people who have wanted to change. I had a call about man in his eighties who has decided that he wants to become a Catholic, it is not quite in extremis but he is housebound and I am trying to think what is the minimum of catechesis he needs. I have a letter from another priest who told me of a lady who wants to go to confession after 50 years.
It is not quite unusual for people to return but invariably those who have been away for a long time just don't know what to do when they come back. "It has all changed", is not an unusual reaction.
Nostalgia brings them back and the same nostalgia causes them dis-ease when they return. It is as someone once said to me, "I was the prodigal son who was away from my Father's house for a long time, and when I returned it was a bit like my father had moved house and had plastic surgery. I couldn't recognise anything".
One of the advantages our forefathers had was that the Church offered a more-or-less standad "product", if you left it, it was still the same when you returned 40/50 years later, whether it was in England, Ireland or anywhere. I think here in the city centre we pick up alot of returners, who just happen to wander into the Church, they don't want to go through "a process" which might well work well in more stable community, here they just seem to want to pick up where they have left off. After a period, they might well get themselves along to confession. Having a liturgy that deliberately tries to look back helps.
Nostalgia is a useful pastoral tool.
at February 28, 2008

A lot of people were undeniably driven away by "the changes".
Most of them, I suspect, won't return.
Those who do return won't do so, I feel sure, until there is a traditional liturgy for them to return to.

Meanwhile, the next generation of Catholics has been sabotaged by the collapse of Catholic education : they simply were not taught the Catholic faith.

How can they return to the Faith they never knew ?

And so it goes on, one generation after another, so much destroyed, so much lost.

The people who are responsible for the disastrous liturgical revolution and calamitous loss of Catholic education have much to answer for, and one day they will have to answer to Amighty God himself.

The work of rebuilding has undoubtedly begun, but the labourers are fewer than they were, and after so many years it will it will be a long hard struggle.

As it is, things will never be the same again.

Meanwhile, the secular world has become a terrible place.
Souls are being lost.

Where is the Church in all this ?
Oh, it's still there.

But a return to traditional worship has become a pastoral imperative.

God bless your "reverts" and I hope and pray all good things for them.

I guess I am a revert. I came home when I was finally able to learn the Faith as it is. Frankly I had been lied to as a child through the '70's and '80's.
Resouces out of the USA are amazing- but they are not in our schools or churches are they?