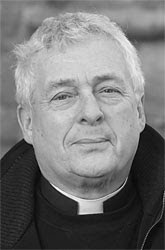 One of the local Anglican clergy, Alan Sharpe, has got into a bit a of scrape. He was filmed going to a cash machine and giving money to a man who then went off to buy heroine.
Fr Sharpe has built up a ministry serving the poorest of the poor in Brighton. He has truned part of his Church into a hostel for the homeless. For doing that, some in our city hate him. I don't know the ins and the outs of the case, apparently there was a t.v. documentary on him last night.

There was a bit in the local paper:

"Brighton and Hove City Council has begun an investigation."
Andy Winter, from Brighton Housing Trust, said it was inappropriate for people working with the homeless to have personal friendships with their clients". Well, that might be appropriate for a social worker but it is a little bit different for a priest. I am proud that some of my friends are junkies, they move in out of being "clients" to being friends and back to being "clients", that is the nature of being a priest, it only really works on the level of being a friend, that's what Jesus did. Social workers tend to be "hired men".
"It's inconceivable that you would move someone into your home," he said. Maybe, but not if you are a Christian, I have had the occassional homeless person living here. What social workers don't understand is that Christians by nature (Christ's nature) are called to take risks with people, at times to be wreckless in their loving.
And after claims he gave cash donations to a drug addict, Det Ch Insp Ian Pollard said: "It's irresponsible because it will mean that they will go and purchase heroin and in some cases it may actually lead to them overdosing. All too true, but it is very often difficult to tell the difference between a good story and the truth. The odd twenty pounds can make all the difference, a night in a guest house rather than on the beach, can make the difference between a job the following morning and a descent into the culture of dependency. On rare occassions I have done the same thing, I am sure I have been duped, but better to be foolish than turn away anyone in real need.

I don't know much about the case but I support Alan, and ask for your prayers for him.
A journalist friend says that she thinks this is just another of those malicious, "let's dig the dirt" stories. The problem is that Christians we are called to be irresponsible for the sake of the Gospel, we don't follow social workers "best practice" models.
at February 23, 2008

It is of course good to help but the way the help is given needs to be thought through. In situations such as this it is probably best to give in kind rather than to give money. It is a pity that more young people do not join religious orders as providing appropriate help is best done by a group rather than individuals. Then the rest of us can support through contributions.

That said, in my experience, Christians are often good at front line help but REFUSE to think about the spritual, political and economic causes that have brought an increasing number of people to the situation they are now in, that cause them to need help in the first place.

The parish soup run seems to pitch things at about the right level as it operates with clear boundaries.

You described perfectly the difference between a priest and a social worker. Alas, we lack men of God and we have too much « hired men ».

Brighton Council would do anything to get the Homeless off the streets other than actually HELPING in a Christian way.What they want is for the really desperate to go back where they came from.The INSIDE OUT team are just a bunch of troublemakers who will do anything for money including destroying peoples lives.

Fr. Blake - I will pray for you and Fr. Sharpe.

I'm so happy you are such good priests. I love it that the two of you can be irresponsible for the love of Christ.

Each city the size of Brighton needs 10,000 religious brothers and sisters.

Good point Father on giving. If one adopts the policy of only giving alms to the thoroughly virtuous and pure, such a policy will ensure that a penny will never leave your pocket.

"The problem is that Christians we are called to be irresponsible for the sake of the Gospel, we don't follow social workers "best practice" models."

But try telling that to the Protestant or agnostic social workers employed by many of our Catholic bishops to act as all-powerful Child Protect....sorry, Safeguarding Officers!

Christians are always going to be duped on occasion. Better that way than to turn people away. Intentions are very important for us, only outcomes for some other people.

He's in good company; Mother Theresa is often criticized, I've heard The Passage rubbished on R4 for giving people sandwiches donated past their sell by date, but not the use by date - I'd be happy to eat them and the food prepared in their kitchen is great - all the staff volunteers and clients eat the same stuff too.

Everything is getting very bossy in this country, when it's not downright scary.

You're absolutely right and we need more priests and social workers to take that attitude. Everyone needs to get personally involved. The poor and the homeless should be treated like what they are, human beings, not as case studies.

God Bless you, Father. I will pray for both you and this good Anglican priest too.

God Bless you both.