Sharia in the UK! 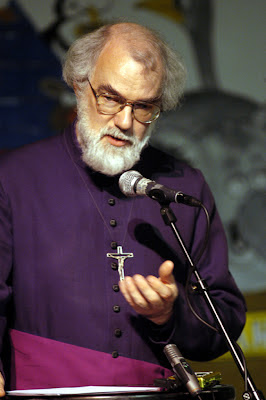 Dr Williams has stirred up a hornets nest over his statements about the possibility of Sharia law in the UK. It is perhaps easy to dismiss him, but I think what he is talking about is using some sort of community arbitration, in certain situations, and the state recognising the rights of religious minorities. He is not arguing for the stoning of adultresses.
In the article below he sites the situation of Catholics and adoption by homosexual couples. I know of Muslims who have difficulties reconciling certain aspects of financial law and what the Qu'ran says about usury. I suspect the real problem is simply that we have far too much intervention by the state in the lives of individuals and far too many laws.
When a society loses common values it begins to break down the tendency of governments is always to use the law as a sticking plaster to keep it together. Increasingly in the UK our government is imposing on Christians and Moslems alike a morality that is alien to both groups and contrary to the Natural Law

BBC
......... We don't either want a situation where, because there's no way of legally monitoring what communities do... people do what they like in private in such a way that that becomes another way of intensifying oppression inside a community."
The issue of whether Catholic adoption agencies would be forced to accept gay parents under equality laws showed the potential for legal confusion, he said.
"That principle that there is only one law for everybody is an important pillar of our social identity as a western democracy," he said.
"But I think it is a misunderstanding to suppose that means people don't have other affiliations, other loyalties which shape and dictate how they behave in society and that the law needs to take some account of that."
'Custom and community'
Dr Williams noted that Orthodox Jewish courts already operated, and that the law accommodated the anti-abortion views of some Christians.
"The whole idea that there are perfectly proper ways the law of the land pays respect to custom and community, that's already there," he said.
People may legally devise their own way to settle a dispute in front of an agreed third party as long as both sides agree to the process.
Muslim Sharia courts and the Jewish Beth Din which already exist in the UK come into this category.
The country's main Beth Din at Finchley in north London oversees a wide range of cases including divorce settlements, contractual rows between traders and tenancy disputes.

Can't be worse than the Magistrates Court and save a lot of money.

To an extent the Archbishop is right. English contract law allows parties to choose the law of a foreign state as the law of the contract, and can agree to make it actionable in a foreign court. The foreign state could easily be a Muslim one, though English law regulates the terms on which foreign law and foreign judgements are admitted to the English forum.

As for matrimonial causes, the establishment of religious courts is part of the religious community's determination of personal status relative to eligibility to be married in Church/Mosque/Synagogue.

Why not simply hand the whole country over to the muslims and Sharia Law and be damned! Can't possibly be any worse than living under this totalitarian nanny Nu-Labour-Tory shower of a government with the useless, toothless, pro-the-villain, waste of space judiciary system and its immoral laws that we presently live under.

Is it ok to pray for the return of the Catholic Monarchy to Great Britian? Can we get a solid Jesuit over to Buckingham Palace please!

Don't the BMA adjudicate in in medical cases, the same with the Law Society and many other professional bodies?

The trouble is, what sort of sharia model is Dr. WIlliams thinking of? There are so many differnt Muslim countries that apply sharia to greater and lesser extents. I would forsee profound problems with say for instance a divorce where one party wishes the divorce to be dealt with according to sharia and one to English law, or they may decide to change their mind or appeal against a ruling in a different court system. In trying to be accomodating, Dr. Williams is helping to create more incohesion- but oh, I forget, that is what the Anglicanism is all about.

James Perhaps you have not read my own comments in my blog
Fr.Mildew. I think they are quite rational and understand the point of view the Archbishop made. He was really trying to instigate a debate on a very interesting point.

'The trouble is, what sort of sharia model is Dr. Williams thinking of?' - silly question anonymous - why, the 'Cut off their heads' model of sharia law of course! Something similar worked very well in England in good 'ole Henry's day! The Protestants could probably have taught the moslems a trick or two I'll bet.

George evidently you haven't read the Abp's speech, he is explicitly saying he is not asking for that.
He is asking for Moslems to be able to have their marriages recognised and celebrated in a mosque for example.

Anonymous - I know what the arch druid is saying but have you forgotten that old saying - 'give 'em an inch and they'll take a mile'. Soon all the kids on the block would be singing that rather poignant (at least for Catholics) nursery rhyme 'Oranges and Lemons.... la la la...'

Are you sure anonymous? i'm with George!

The trouble is that most British born Muslims have got less of an idea what Sharia Law means than the rest of us,they seem to think it might be a free licence to mutilate the Infidel.

Nickbris - what do mean by 'religeous education here is ABYSMAL'. Please explain further....