The Cardinal's letter on the liturgy 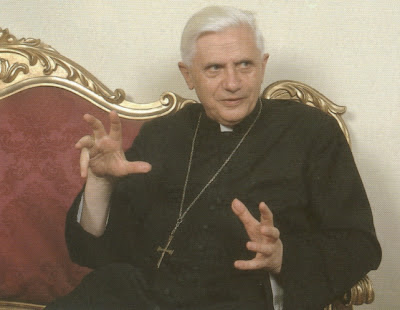 Cafeteria is Closed has a very interest letter from 2003 about the future of the liturgy.

Dear Dr. Barth !
My heartfelt thanks for your letter of April 6, which I didn't have time to answer until now. You're asking me to lobby for a wider permission of the old Roman Rite. As you well know, I am very open to such requests, as my efforts towards this end is widely known by now.

Whether the Holy See will permit the old Rite "once more worldwide and without limitations" - as you desire and have heard rumors to that effect - I cannot simply answer, let alone confirm. The dislike for the traditional liturgy, which is called, with contempt, "pre-conciliar" is still very strong among Catholics who've been drilled to reject it for years. Additionally, there would be strong resistance on the part of many bishops.

The situation is different if we consider a limited re-admission - the demand for the old liturgy is limited as well. I know that its value does of course not depend on the demand, but the question about the number of interested priests and laypeople plays some role. Furthermore, such a measure can only - even today - be taken step-by-step, some 30 years after the introduction of the liturgy reform of Pope Paul VI. Another hurried effort would certainly not be beneficial.

I think, however, that, in the long run, the Roman Church must once more have one Roman Rite; the existence of two official rites is difficult to "administrate" for bishops and priests. The Roman Rite of the future should be a single rite, in Latin or in the vernacular, but standing wholly in the legacy of the traditional Rite. It could incorporate some new elements that have proven successful, such as new feast days, some new prefaces in the Mass, an expanded lectionary - more selection than before (the reform), but not too much; an "oratio fidelium", ie a fixed litany of intercessions, following the Oremus before the Offertory where it used to have its place.

Dear Dr. Barth, if you work for the cause of the liturgy in this manner, you will certainly not stand alone, and you prepare the "public opinion" in the Church in favor of an expanded use of prior Missals. One needs to be cautious, however, so as to not spark expectations that are too high among the faithful who feel close to tradition.

I shall use this opportunity to thank you for your highly esteemed efforts for the liturgy of the Roman Church, in your books and lectures, although I'd like a bit more love and understanding here and there for the teaching authority of the Pope and bishops. I hope that the seeds you're sowing will germinate and bring much fruit for the renewed life of the Church, whose "source and summit", whose very heart indeed is and must remain the liturgy.

This is fascinating - presumably Cardinal Ratzinger's views on the liturgy were known at the time he was elected Pope. This seems to mean that although many Bishops are not in favour, the majority of Cardinals were.

That says it all. Now, if everyone would just follow his lead.

The date of this letter from the then Cardinal Ratzinger is a reminder that the traditional Mass remained in shackles for far too long.

(Isn't it interesting to read his insights into the situation ? He knew what opposition there would be to a full restoration.)

However, as Pelerin so rightly points out, the cardinals, who knew very well what they were doing, elected Cardinal Ratzinger,
who had pretty clearly shown his hand in the establishment of the "Ecclesia Dei" commission.

The "old" Mass, (which was never abrogated,) is now legally on a par with the "new" Mass.

The era of the Indult is well and truly over.

All dissent to the contrary notwithstanding, the Pope has said so.

After what seems a very long time, we are living in the (very early) days of the Catholic revival.

Liturgical abuse, dissent and disobedience will continue for a long time yet.

Prayer, much prayer, is needed, for the Pope and the bishops.