Mssage from the Cardinal: Human Embriology 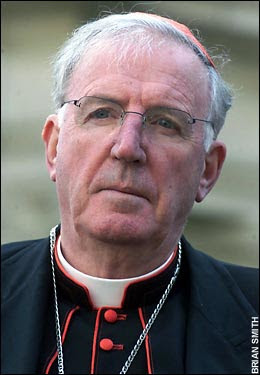 As you will know, there is a Bill currently in Parliament which touches on profound questions of human life and dignity. The Human Fertilisation and Embryology Bill has just completed its passage through the House of Lords and will be debated in the House of Commons in the next few weeks.

The Bill extends the scope of scientific research on human embryos and even allows the creation of animal and human hybrid embryos for research. It removes a provision to have regard for the child's need for a father when IVF methods are used. And there is every chance that there will be attempts in the House of Commons to use this Bill as a vehicle to liberalise the abortion law still further.

Many people of all faiths and none are deeply concerned by the moral questions raised by this Bill. These concerns were set out in Parish briefings sent to every parish from the Bishops' Conference to all our parishes over the last few weeks. Now is the time for our voices to be heard. This needs as many people as possible to write to - and better still ­ to go and see their MP and to register their deep concern about this Bill. Please urge your MP to support amendments to the Bill which would limit embryo research, recognize the need for children to have knowledge of their biological father, and which would reduce rather than increase the numbers of abortions. MPs should also request and be granted a free vote on those parts of this Bill which deals with fundamental issues of personal conscience.

During this time of Lent we are encouraged to reflect on our own lives and to rededicate ourselves as Christians to serving the Gospel in our world. Taking action on this pressing issue now helps to remind us that our Christian witness can never just be personal but involves us too as citizens committed to serving the common good of society and to upholding the human dignity of all.

I wrote to my MP a couple of weeks ago and received a reply today. He's adamantly in favour of the Bill, and it looks to me as though there's no hope of stopping it.

Sounds to me like most of the current batch of UK politicians are the result of hybrid crossed human genomes with DNA extracted from genetically engineered cabbages! Well, they can have their abominable HFE Bills & Bens and to hell with the lot of them. They have no realisation of the backlash that will surely come our way because of this gross immoral crime against human dignity and the basic essence of humanity. They should remember this: God always forgives, Man sometimes forgives but Nature NEVER forgives.