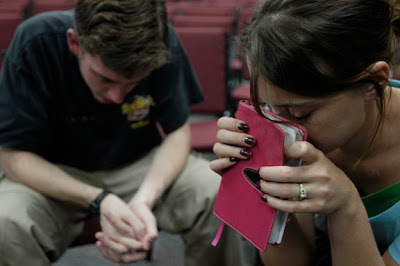 At one time I used to meet rather sad men who seemed not very talented at anything who would tell me that their prayer group had prayed and it seemed as if God had chosen them to have "a music ministry". Invariably this menat that the poor individual would then sing with great gusto and strum his guitar's three chords on every occassion, never improving.

Lately I have met a few people who tell me they have "a prayer ministry" and on occassion I have met people who received the services of someone's "prayer ministry". Now, all Christians are called to pray and to pray for others. I would delight in someone saying rosaries and the psalter, especially the penitential psalms for me or offer the Holy Communion for me and devote a couple of hours before the Blessed Sacrament for me, if they were to offer up sufferings and undertake various other acts of penance, I would be thrilled. That would be a real prayer ministry.

But terms like "prayer ministry" seem to be about a power relationship, where someone who claims a certain charismatic power excercises it over someone who seems to be in need or simply someone they determine is in need.
To me it seems profoundly un-Catholic. I am not sure what happened in the dim and distant past. I don't know how the ancient ministry of exorcist operated. The Catholic Church has always stressed that the prime actor in its rites is always Christ, never the individual minister, hence the insistance on "doing the red and saying the black". This is actually an important theological isssue that the Church has safeguarded down the centuries. The priest or other minister is God's servant, God is certainly not his.

There is a real pastoral danger, of spiritual abuse, in what is often spoken of as "prayer ministry" or as it often becomes "deliverance ministry".
"I just want to bring before you, Lord, X who is suffering from the spirit of Z", has so many tightly packed theological, spiritual, psychological and emotional implications. For its Sacred Ministers at least within its rites the Church forbids ancd condemns this type of thing, yet it is very prevalent amongst many charismatic lay people, religious, hospital, even school chaplains, extra-ordinary ministers of Holy Communion.
I heard recently of a female religious with "prayer ministry" who seemed to be using her own version of the Rite of Exorcism, forbidden to anyone but the diocesan exorcist. I don't know what effect it had on her subjects but she seemed rather damaged by what she had been doing. This stuff doesn't come from the Catholic Church, it is entirely Protestant and very dangerous.
at February 19, 2008

I've seen some of this sort of thing too. It seems to grow out of the spiritual needyness of so many people who have no guidance and desperately need answers.
Those with the 'power' always give me the creeps; it's all well dodgy.

I don't see what's un-Catholic about this kind of ministry. I would define something as un-Catholic once it starts to displace the sacraments as opposed to complementing them.

Thee shouldn't be a conflict beween ad hoc charismatic ministries and the sacramental ministry of the ordained clergy. The former have their place in the Church and can be succesfully integrated into her life if given proper spiritual direction and oversight by the hierarchy.

Where is it in The Tradition, Michael?

Is "prayer ministry" a form of spiritual direction? The main difference being that the former is undertaken by a lay person and the latter by a priest?

If we see "prayer ministry" as a form of spiritual direction, then a great responsibility rests on the lay people who undertake it - and we have a right to expect them to receive the same degree of formation ("formation", not just "training")that a priest or religious receives during their preparation for ordination or religious life (6 years ...).

Another aspect to such a formation is that it is not just a formation, but a formation within a charism recognised by the Church (eg that of vocation to the priesthood if the director is a priest). Many of the concerns expressed in Fr Ray's post seem to me to apply where a diocese arranges to train lay people for this kind of ministry without attention to their insertion within a genuine ecclesial charism.

A key point seems to me that spiritual direction is undertaken in a kind of mutual obedience of the director and the directed to the working of grace - and that is decidedly a matter of formation and not of training.

A situation where a lay person acts as a director within, say a third order or new movement, seems rather different to me, as it is inserted within formation to a particular charism. Perhaps there is some experience of direction in this context that could shed light on the concerns expressed in this post.

Let's make this thing clear - these are not ministries - these are spiritual works of mercy -utilising a talent - singers and musicians make a joyful noise unto the Lord....
Is there anything more contemptible than 'Today I bring before you Lord...'?
It's obscene - ultra-protestant and utterly anti-catholic ; it's almost spitting in the face of God; as if He is not aware of everything under the sun ?? He who planteth the ear, shall He not hear? He who formeth the eye , shall He not see ?
I belonged to a prayer group run by the saintly canon John Udris ; author of a wonderful book on St Therese ; we had cassian meditation, the candle prayer, petitions for the parish , hymns, etc... there was never a hint of it ever being a narcissistic exercise in vanity on anyone's behalf....
Prayer Ministry ? We're all called to a prayer ministry ???!!! It's like saying I'm a breather , a food-eater....

Fr. Ray, I will offer a rosary for you this evening before I go to sleep, it will be for your intentions.

I'm not very good overall at imitating my confirmation saint, St. Therese, but one thing I can emulate her in would be praying for you.

BTW, I've never held much truck at all with the charismatics in general. Particularly of the falling down, hand holding, kumbaya singing and fainting variety. Maybe some of them are welling meaning, but it always seemed like a little hooey at its best and a lot of disguised rosecrucianism [sp! at this hour] and / or gnosticism at its worst. [My thoughts always run: "Who died and made you guys Maharincesses?"]

I agree with you Fr..dangerous..

Chris, you could have asked that question eight centuries ago when St Dominic introduced the Rosary.

The best definition of Tradition I can think of is that it is the transmission through history of the uncreated Word of God in the Blessed Sacrament.

Anything which can successfully be integrated into the communion with the Blessed Sacrament, and into hierarchical communion with Rome, belongs to the Tradition, no matter how new it appears to be.

Karen, very kind of you, I am much indebted, I 'll remeber you during the next hour of the Office.

We have a charasmatic prayer group at our church. Much "slaying in the spirit" going on there. The women who started it thinks she has the gift of healing and tongues. However, she also thinks she has to receive under both kinds to receive the "whole" Jesus.

How about you all just get together and say a rosary?

Thanks for remembering me in your Office today, Father. I especially need a boost this particular week.