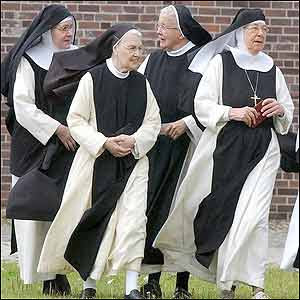 The BBC reported L'Osservatore Romano as saying that last year there was a 10% drop in the numbers of members of religious institutes.


(CWNews.com) - After L'Osservatore Romano reported a dramatic drop in the membership of the world's religious orders, the Vatican has issued a correction pointing to a much gentler decline.
Between 2005 and 2006, L'Osservatore Romano reported, the number of male and female religious in the world dropped by nearly 95,000. The entire religious population now stands at just over 945,000.
However, on the day after those figures were published in the Vatican newspaper, the Vatican press office corrected the record. Father Ciro Benedettini, the deputy director of the press office, said that the accurate figures showed a decline of just 7,230 over that one-year period.
Thus although the world's religious population did decrease between 2005 and 2006, the decline was less than 1% of the total-- rather than nearly 10%.
Among the 945,000 members of religious orders, the vast majority- over 750,000-- are women religious.
at February 06, 2008

Nuns were always the best football coaches. Look at the state Newcastle United is in now and pray for more female vocations! The world needs more nuns!!
Stop Press: England v. Switzerland. That's a bit better! Has our new Italian manager brought some religious sisters with him to show the boys how to do it?

where does this nice pic of cistercian nuns come from? Where do you find nuns that look like that in England?

I think I just looked up "nuns" on google.