Monk tipped to be archbishop 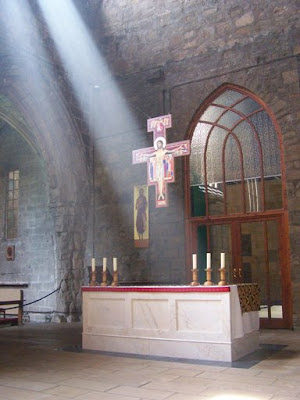 Christopher Morgan and Mark Macaskill in the Sunday Times
A MONK in a remote Scottish abbey has emerged as a surprise contender to replace Cardinal Cormac Murphy-O’Connor as leader of the Catholic Church in England and Wales.
Hugh Gilbert, 55, the abbot of Pluscarden Abbey in Elgin, Moray, has become a serious candidate to replace Murphy-O’Connor when he retires later this year.
The ultimate decision will rest with the Pope, but senior church figures are said to have been impressed with Gilbert’s orthodox views and leadership skills.
....
Although several serving bishops have been mooted as possible successors, one senior Catholic source said: “It is time to go outside the episcopal club of England and Wales.”
For some time Rome has felt that the liberal drift of the bishops has failed to halt declining church attendance. Gilbert would represent a change in style because he is known as a traditionalist with dynamic qualities of leadership. He has presided over an expansion of his abbey and the founding of two offshoots in Africa and America.
Another senior Catholic said: “It’s true that Hugh’s name is being discussed as a potential successor and he is mortified and embarrassed at the attention he is receiving.
“I don’t think it’s out of the question that he could be appointed. He is part of a very successful monastic community which is bursting at the seams. He is a quiet, scholarly monk who would probably accept the appointment out of obedience to the church.”
Vatican officials visited Pluscarden and are said to have been impressed with Gilbert’s powers of delegation and the high esteem in which he is held within and outside the monastery.
An Englishman and a convert to Catholicism, Gilbert was educated at St Paul’s school and King’s College London. He became a monk in 1974. Since his election as abbot in 1992, Pluscarden has gone from strength to strength and is now home to 27 monks. He is known for humility, a self-effacing style and “a dry sense of humour and sparkling wit”.
Murphy-O’Connor was due to retire last year on his 75th birthday but was asked to remain in office. His successor will be chosen by the Pope from a list of three names drawn up after extensive consultation.
In addition to Gilbert, those tipped for the position include Vincent Nichols, the Archbishop of Birmingham. He is known to be an enthusiastic supporter of the Pope’s campaign for liturgical renewal and, although he was long suspected by Rome of being liberal, he has now presented himself as a conservative. Nichols is said to have impressed Rome with a sermon he gave in Oxford last year on traditionalism in the church, as well as with his readiness to challenge government policy over Catholic schools and gay adoption.
Murphy-O’Connor is believed to favour Peter Smith, the Archbishop of Cardiff, a chain-smoker who has been prominent in dealing with issues such as abortion and euthanasia. Smith played a leading role in 2004 in ensuring that the Mental Incapacity Bill did not lead to euthanasia by the back door. In addition to the two archbishops, Arthur Roche, Bishop of Leeds, has established a reputation as chairman of the body that is revising the texts of the mass.
Whoever succeeds will be expected to find a way of tackling secularism and boosting church attendance. The Catholic Church has suffered a serious fall in the size of its congregations in Britain, although recently its numbers have been bolstered by the arrival of hundreds of thousands of Poles and Lithuanians after the expansion of the European Union in 2004. Attendance at Sunday mass in 1991 was recorded as 1.3m, a drop of 40% since 1963.
Were Gilbert to move to Westminster, it would be a marked change of lifestyle. As well as being in a remote location, Pluscarden belongs to the Benedictines, who follow the rule of the 5th-century pioneer St Benedict. The monks lead a life of prayer and quiet reflection, rising each morning before dawn and spending much of the day singing Gregorian chants.
They do not have access to television or radio and believe the world is best served by withdrawing from it and praying for it. Last week Gilbert was unavailable for comment.
at February 03, 2008

Please Papa Benedict - do not give us another liberal manager of decline.

The Church in E&W needs spiritual renewal especially in our schools and colleges, and our Priests need to know that they have total support from the top so that the Magisterium and fullness of our Glorious Faith can be preached from the pulpits. That is the only way to ensure that those who have fallen away from the Church or those that do not know which way is up anymore because of poor formation over the last forty years return to the regular practice of the Faith.

PS - I thought the two top runners were Blake and Finigan!

George,
The second of "top runners" is much more sensible than the first!
Above all I think we need someone obviously committed to Christ and his Church.

It is not fair to any of these men, least of all to Abbot Gilbert, to expose them to publicity of this kind on a blog like yours. If anything it will have a counterproductive result, assuming that anybody with any sense reads it for more than amusement.

Anonymous, discussing these tips certainly will have results but I think they come under the description of counter destructive not counterproductive. Why is it so unfair to be drawing attention to the competencies of these men and their aptness for this important role? Are we supposed to keep quiet and let the usual gang keep pushing men who are unfit for positions. Positions that are cruelly placed upon them that bring them to mental breakdowns and depression. No, in all charity it is right and proper to ensure that the best man gets the job. That he can fulfill the role and can help our other Bishops out of the state of abject depression, failure and despondency in which they are trapped.

Well said Benfan.
There was infinitely more speculation amongst the faithfull as JP11's health was deteriorating fast as to who would be the right man for the next Papacy!
Times like these help focus the mind on the situation - where we are at the moment and where we want the Church to be. OK - if you want to make God laugh tell Him your plans! - but, nevertheless hiding behind closed doors and telling everyone to shhhhh, things are fine has brought us here in E&W to a very 'lukewarm' state indeed. To let it continue would be a disaster! Let's have some openness and debate yes even on the blogs - hopefully someone in Rome might get a taste of 'grass roots' feeling here on the ground in good ole' Blighty.

Still signing in as 'anonymous', oh dear, how sad.

monks as Bishops...hmmm just like it used to be ( and still is in the east), anyways, you may enjoy then?, this video/slideshow of Pluscarden Abbey.
pax
http://vocation-station.blogspot.com/2008/02/pluscarden-abbey.html