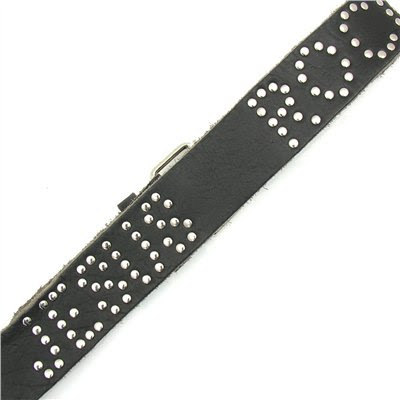 I was wandering along the street yesterday and saw two elderly sister with a gang of young lads. Theresa was patting one of them on the shoulder and evidently praising him and telling the rest how splendid he was, he looked highly embarassed, his friends a little bemused. Eventually they walked on looking back at the sisters with a bit of perplexity.

What was going on there I asked when I caught up with them, Maureen, said, "Theresa was just praising that young lad for standing up for his faith, by wearing a "Jesus Rocks" belt". It had the legend in studs around it. "Yes, she was saying how good it was that a young man was willing to proclaim the Holy Name amongst his friends and to the world."
"That's right, Father, I said that as he was proud of proclaiming the Holy Name he ought to think about a vocation to the priesthood", said Theresa.
I suggested to both of them that the belt might just be a post-Christian fashion accessory, "Ah, no Father, that would just be too cynical." she said grinning. "If it was, well in future, everytime he puts it on, he is going to remember that two old ladies saw it as a great sign of his faith," then after a pause she added, "It could of course be that he never wears it again".

I knew another woman who used to prowl the shopping centre with leaflets on the Rosary, and give them to people she saw wearing one.
Having just tried to find a picture, I have just discovered they are available from All Saints, a clothing chain which rather cynically decorates its shops with Catholic iconograpy, they cost £60 or US $120!
Personal names have been changed by the way.
at February 21, 2008

What a wonderful story. Thanks.

It was quite prevalent for night-club goers to wear rosaries two summers ago - what was absolutely scandalous and reprehensible was the wearing of them on Big brother seven - even during the most outrageous sexual activity...Father forgive them, for they know not what they do...

p.s. thanks for the plug yesterday - 191 vistors !! more than I normally get in a fortnight !

re: the rosary beads on people who are wearing them wrongly -- I always have a hope *however tiny) that for at least a percentage of them they will react as Richard Burton did in the movie "the Robe" he dons the garment Christ was stripped of [he was the solider who "won" the robe in the lot casting business) and it "did something" to his psyche.

I'm hoping the cretins who use them as a "Fashion statement" will see the light in a similar way.....eventually....

We were told clearly at primary school that rosaries were totally different from necklaces and were not to be worn round the neck.

Mind you I remember kicking myself aged nine when a teacher told the class off because no-one remembered that the difference between people and animals was that we have souls and they don't.

The name of the school? Our Lady of the Rosary. No messing and that was the late 70s. Time stood still, luckily for us.

leutgeb - who says animals don't have souls ?? aquinas doesn't !!
degrees of being and all that Jazz - I had a massive barney about 5 years ago with the EWTN philosophy expert who dismissed the whole idea hands down...
we don't know and as such must remain silent - all we know is that all that is true and loving and created in God's own image is never truly lost.
telling a child that their dog isn't in heaven has to be one of the most spiteful un-intellectually as well as unnecessarily cruel things going ! Shame on them...
The soul is reflected in the intellect and the will - hand on heart I would swear some great apes [orang-utans especially] are more 'human' and noetic than some people I know !

:-D It is certainly by grace of God I hope that my dogs will be in heaven. I can't imagine God making something that wonderful and not wanting them around.

I think my 1st grade nun had the perfect answer (they must have gone to "nun school" for this one) "You will have everything in heaven to make you happy."