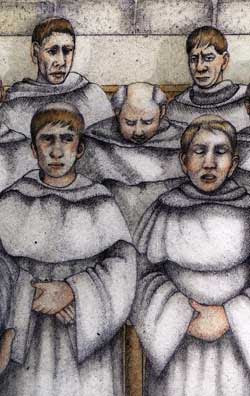 Universal Music, the record company whose artists include Amy Winehouse, Eminem and 50 Cent, is looking for monks to sign to its books.

The music giant has placed adverts in religious publications like The Tablet, The Church Times and The Catholic Times to find monks, men of the cloth or sacred singers to record an album of Gregorian chant.

It believes the bestselling computer game phenomenon Halo has sparked a resurgence of interest in plainchant, which has traditionally been sung by choirs of men and boys in churches.

It is hoped that male or female singers, "outside the X Factor generation", will respond to the full-page adverts, which also appear in The Universe and The Catholic Herald.

The record company wants liturgical singers to send in audition tapes to Universal Classics, which intends to record an album of Gregorian chant, one of the earliest known forms of music, dating from the early Middle Ages.

Universal Classics and Jazz managing director Dickon Stainer said: "We want people that are genuine, who can sing it as it should be sung. That's not that easy. It's going to be a challenge. You can't open the Yellow Pages and call a monastery.

"Ever since the last Halo game we've had so many inquiries about plainchant.

"It seems to be that younger people have some awareness of what a Gregorian chant is, even though it is not something that you come across in everyday life.

"We've even been asked by festival organisers if we've got nuns or monks on our roster. We've had to say 'no, we haven't signed up any monks yet'. It made us think that there's something in it. It's quite unusual. We want to reach singers outside the X Factor generation."
at February 13, 2008

Perhaps we could focus on this in our own liturgy? And try to get the school involved. They are singing so very well now, as we heard on Ash Wednesday, so chant should come easily to them. With the forthcoming compulsory schools "culture" ration, this would be an appropriate way to meet the new target.

"You can't open the Yellow Pages and call a monastery."

Don't see why not... or , if not the Yellow Pages, then the Catholic Directory should be easy enough to find!

kind of odd, why dont they call a Solesmes Congregation Monastery? or some of the more traditional Benedictines?, unless, perhaps because most Monasteries that have kept full Gregorian Chant already have a few cds for sale, and they may want something that would be 'never done before' or done by Lay Faithful?
anyways, here are 2 fine examples from existing recordings of Monastic Gregorian Chant.
pax
vocation-station.blogspot.com/2008/02/et-lux-in-tenebris.html
-
vocation-station.blogspot.com/2008/02/da-pacem-dominemonastic-gregorian-chant.html

I wouldn't have thought they'd attract many religious by advertising in the Tablet....well, none that sing chant anyway!

Gregorian Chant and polyphony tracks and links to purchase the CD's are available on-line at Choral Treasure http://choraltreasure.org/ and other sites.