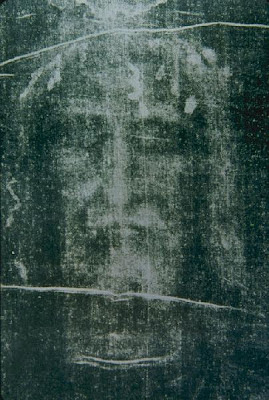 From the Daily Telegraph
The Oxford laboratory that declared the Turin Shroud to be a medieval fake 20 years ago is investigating claims that its findings were wrong.
The head of the world-renowned laboratory has admitted that carbon dating tests it carried out on Christendom's most famous relic may be inaccurate.
Professor Christopher Ramsey, the director of the Oxford University Radiocarbon Accelerator Unit, said he was treating seriously a new theory suggesting that contamination had skewed the results.Though he stressed that he would be surprised if the supposedly definitive 1988 tests were shown to be far out - especially "a thousand years wrong" - he insisted that he was keeping an open mind.The development will re-ignite speculation about the four-metre linen sheet, which many believe bears the miraculous image of the crucified Christ.
The original carbon dating was carried out on a sample by researchers working separately in laboratories in Zurich and Arizona as well as Oxford.
To the dismay of Christians, the researchers concluded that the shroud was created between 1260 and 1390, and was therefore likely to be a forgery devised in the Middle Ages.
Even Anastasio Alberto Ballestrero, the then Cardinal of Turin, conceded that the relic was probably a hoax.
There have been numerous theories purporting to explain how the tests could have produced false results, but so far they have all been rejected by the scientific establishment.
Many people remain convinced that the shroud is genuine.
Prof Ramsey, an expert in the use of carbon dating in archeological research, is conducting fresh experiments that could explain how a genuinely old linen could produce "younger" dates.
The results, which are due next month, will form part of a documentary on the Turin Shroud that is being broadcast on BBC 2 on Easter Saturday.
David Rolfe, the director of the documentary, said it was hugely significant that Prof Ramsey had thought it necessary to carry out further tests that could challenge the original dating.
He said that previous hypotheses, put forward to explain how the cloth could be older than the 1988 results suggested, had been "rejected out of hand".
"The main reason is that the contamination levels on the cloth that would have been needed to distort the results would have to be equivalent to the actual sample itself," he said.
"But this new theory only requires two per cent contamination to skew the results by 1,500 years. Moreover, it springs from published data about the behaviour of carbon-14 in the atmosphere which was unknown when the original tests were carried out 20 years ago."
Mr Rolfe added that the documentary, presented by Rageh Omaar, the former BBC correspondent, would also contain new archeological and historical evidence supporting claims that the shroud was a genuine burial cloth.
The film will focus on two other recorded relics, the Shroud of Constantinople, which is said to have been stolen by Crusaders in 1204, and the Shroud of Jerusalem that wrapped Jesus's body and which, according to John's Gospel, had such a profound effect when it was discovered.
According to Mr Rolfe, the documentary will produce convincing evidence that these are one and the same as the Shroud of Turin, adding credence to the belief that it dates back to Christ's death.
at February 25, 2008

The last documentary I seen on this suggested that the only anomaly was the carbon dating. All the other evidence seems to point to it being genuine.

I personally have believed those tests to be wrong. the Shroud was known to have been damaged at the edges from a fire....which even at that time researchers knew could skew results.

Let's say for sake of argument, it comes out with the new testing that it is closer to two thousand years old. You can't "prove" that it actually wrapped Jesus, nor does my faith depend on it. From all the other archeological evidence (I understand there is some fairly compeling matter on it, regards a specific type of plant found only around Jerusalem, among other things, makes me tend to believe it.

It's not only Catholics who have belief in this relic either. Once about 20 some years ago I had business in the south, and near the convention center, there was an exhibit which had back lit full length accurate image of the shroud. I asked the people who ran the exhibit if they were Catholic, but they said, no, that they were Baptists.

I look forward to seeing what happens. I have read a lot on the Shroud over the years and at this point I think it's the real deal.

While I don't actually care very much if the Shroud is in fact the burial cloth of Christ (it makes no never mind to my belief in Him or his death and resurrection) I will again ask the question that I always think of on this subject.

If the shroud were created in the 1th century as a forgery, why is the image a photo negative?

How would a medieval man even conceive of such a thing? And why would someone wanting to make a plausible forgery do it in such a way that the image is so difficult to see?

If the purpose was to convince the presumably gullible medieval pilgrimage public, why wouldn't the image have been created more clearly, in a positive image?

No one ever answers this.

But as I said, I personally couldn't care less if the Shroud was the burial cloth of Christ or if it was made by enterprising nuns in the middle ages to boost pilgrim-derived income.

What bothers me about carbon dating the shroud is more fundamental than the issue of contamination. Carbon dating relies upon an assumption that the history of the object under test since its creation was normal, predictable. As we apparently have no idea how the image on the shroud could have been formed, the use of carbon dating as a trump card is unjustified.

If the image on the shroud had been formed by some unknown mechanism in a unique event, carbon dating could tell us nothing conclusive because it can only make a comparison between isotopic proportions in the object under test with that predicted by models and validated by measurements on other, typical samples. It can't tell us whether the shroud has had a natural or supernatural history - because it assumes the former.

Until we have some explanation of what natural process could have caused the image on the shroud carbon dating can only provide a contribution to a confusing set of shroud data. It was wrong to grasp carbon dating as a proof of the inauthenticity of the shroud. To do so begs the question "can miracles happen?" Of course as catholics we believe that they can and occasionally do, so the onus is still on those who believe the shroud to be a fake to show how it could have been made - even though the question has little bearing on our faith as earlier commentators pointed out.

As an archaeologist I would never be so sure about any date derived from radiocarbon.

They are guides at best and should always be used with other material and not conclusive on their own.

A lot of it boils down to statistical probability, let alone issues of contamination and theoretical problems related to the amount of C14 in the atmosphere and then the calibration of dates against tree-rings and how this will all then relate to 'calendar years'.

Many have an odd view that 'men in lab coats' seem to have absolute answers; perhaps an image they tend to perpetuate themselves as I am sure they would hardly want to undermine their own disciplines.

Barrie M. Schwortz, one of the official Shroud photographers has the most extensive website [http://www.shroud.com/obtain.htm] on the Holy Shroud. When I spoke to Mr. Schwortz back in 2006 he was very generous with his time and shared some of the highlights of the decades he spent studying the Shroud along side the researchers, and how he, a Jewish man, became involved as the official photographer.

Around winter of 2004, he wrote on his website that he now believes it is the shroud of the man, Jesus.

My husband (who is also Jewish) and I purchased the series of cd recordings of the presentations of scientific papers and lectures that were presented in Texas in 2005 (?) and listened to them over the Christmas holiday. The information they contain are very fascinating. The data presented makes the "old medieval" chatter just seem childish.

So it does surprise me that this other scientist are being forced by solid research to backtrack.

Mr. Schwortz's website also has an extensive list of books, cds, and documents for further studying on the Shroud of Turin, too.

The Shroud of Turin has interested my husband and me of years now.

Simon Platt's comments are worth noting - 'silly' modern man is trying to use his 'scientific test meter' to test the untestable - a unique Supernatural event that well, simply defies science and understanding!

We know enough about what the image isn't! There is no technology in the 21st Century to reproduce the effect let alone in centuries gone by.

There is no answer to this Turin Shroud business - it is a matter of Faith. Personally I believe it is the Shroud that covered Our Blessed Lord's bruised, bloody, battered and torn Body. His Body, given of His own love for us, given up for all mankind.

I couldn't agree more with the comments by Simon and George.

You either believe in the Resurrection, or you don't.

It is not scientifically verifiable.

How pleasant to deal with a scientist who is prepared to look again at his evidence and if necessary to say I may have been mistaken. What an example of humility.