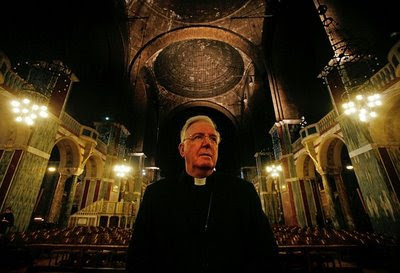 The Guardian reports that the Cardinal has, at last, sacked the entire board of the Hospital of St Elizabeth and St John.

Cardinal Murphy-O'Connor, head of the Catholic church in England and Wales, intervened in the affairs of the hospital of St John & St Elizabeth in London, where he is patron, after protracted rows over the adoption of a tighter ethical code banning non-Catholic practices such as abortions, contraception and sex-change operations.

The cardinal's office confirmed the appointment of a new chairman, Lord Guthrie of Craigiebank. The former army chief of staff will select new directors, who will meet on Monday. A spokesman for the cardinal said: "In light of recent difficulties and challenges the cardinal asked the board to resign their office. This was to enable a new chairman to begin his office with the freedom to go about ensuring the future wellbeing of this Catholic hospital. The cardinal offered his sincere thanks to the old board and all they had done."

The hospital's deputy chief executive, Claire Hornick, said in a press statement that there was no intention to issue further details about the resignations. It also aimed to allay fears about the future of the hospital: "Lord Guthrie, supported by Cardinal Murphy-O'Connor, has stated that under his chairmanship there is no desire that the hospital be sold and that the committed plan remains to continue the objects of the charity, which, guided by its Catholic ethos, is to serve the local community."...

The GP practice, which has 9,000 patients, has scandalised staunch Catholics, who believe its activities undermine the religious ethos of the hospital....

The cardinal's primary objective has always been for St John & St Elizabeth to remain a Catholic hospital and several issues were jeopardising that aim, including GPs prescribing the morning-after pill and referring patients for abortions.

In 2005 he wrote to the then chairman, Lord Bridgman, and said: "There must be clarity that the hospital, being a Catholic hospital with a distinct vision of what is truly in the interests of human persons, cannot offer its patients, non-Catholic or Catholic, the whole range of services routinely accepted by many in modern secular society as being in a patient's best interest."

The Right Rev George Stack, an auxiliary bishop of Westminster, was appointed to the hospital's ethics committee to ensure Catholic teaching was upheld in the new code. Its introduction, however, led to a boardroom revolt in December, with two directors resigning in protest, arguing that the cardinal placed Catholic values above patient care. Bridgman stepped down a week later.

This will go down in history as the Night of the Long Scalpels.

Finally the Cardinal has done the right thing!!!

It was a hard move but the right one I think. Well done to Cardinal Cormac for having the guts to stand up for the faith and all it represents. This together with his work on the human-animal hybrid issues stands to him.

Well done Cardinal Murphy-O'Connor! He has certainly taken a bold stand and done the right thing.

We could brood over his having taken so long to come to this decision, but just thank God that he has finally made this decision.

This isn't brooding - this is a catholic hospital conspiring in latae sententiae excommunicable acts Can.1329#2.
His Eminence KNEW !
This isn't a little thing - this isn't a mere failure in duty - this had murderous consequences - and our leaders turned a blind eye to it - even when cardinal ratzinger demanded something must be done over three years ago !!!
How many unborn died as a direct consequence ?
Obviously many of the pregnant women would have sought their murder devices elsewhere - but some lives may have been saved rather than having their death warrants signed, sealed and delivered in a catholic institution.
May God forgive us all....

The spin from Archbishop's House seems to be placed into some question by the following press release.

There has been a very surprising intervention by Cardinal Cormac Murphy O’Connor in the affairs of the Hospital of St John & St Elizabeth.

There was a Board meeting on Wednesday 6th February 2008 when Lord Bridgeman, the former chairman and architect of the plan to bring in the NHS/GP practice, resigned from the Board in company with Simon Scrope. The Board also decided to cease instructing Solicitor Anne-Marie Piper of Messrs Farrers, as she had been a very strong advocate of Lord Bridgeman’s secularisation plans. Further the Board decided to suspend Christopher Board from his position as Chief Executive Officer. We also understand that, although the NHS/GP practice has moved in, the lease has not been signed. Those members of the Board who had at last procured a majority in defence of the Catholic identity of the Hospital must have felt pleased with what they had achieved.

One can therefore understand their surprise when in the last week the Cardinal asked for the resignation of all members of the Board except for Lord Guthrie and the nominees of the Cardinal and the Medical Advisory Committee – Bishop George Stack and Mr Nicholas Goddard. This would have left a rump Board of three who would not constitute a quorum and would have no power to do anything. It then appears that the Cardinal has purported to reappoint Anne-Marie Piper of Farrers and asked her to get an order from the Charity Commission to allow the rump board to be quorate and to appoint new Directors/Trustees of the Hospital. Mrs Piper has apparently acted upon this despite the fact that certain of the Directors have decided not to resign. There is now the extraordinary position where the Charity Commission, believing the other Directors had resigned, may have made such an order at the request of a Solicitor whom the Board had apparently ceased to instruct and whom the Cardinal has no more power to re-appoint any more than he can “force” or “order” the Directors to resign as reported in the Press.

Once again we are obliged to ask who is advising the Cardinal in this matter? Having delayed for years to exercise the powers he actually has in relation to the Hospital, he now appears to be exercising ‘powers’ he does not possess. Many of those who have supported retention of the Hospital’s Catholic character must think it completely unreasonable to demand the resignation of those Board members who have acted to achieve that goal. What next is going to happen? Is this new board, imagined by the Cardinal, going to re-instate Christopher Board, as is rumoured, or what? The latest turn of events is to all appearances completely unacceptable. The Cardinal should abandon the position he has adopted and let the sound majority of Board members determine who its new membership should be and who should be its new Chairman.

The Restituta Group was set up in 2005 to protect the Linacre Centre and to return the Hospital of St John & St Elizabeth to Catholicity. The committee consists of Michael MacKinnon, Peter Doherty, Nicolas Bellord and Michael Woolgar. It is under the patronage of Blessed Sister Restituta Kafka an Austrian nun and nurse who was guillotined by the Nazis for disobeying their orders to remove crucifixes from the Hospital where she worked.

The media's coverage of this hasn't been terribly accurate.

I spoke with a number of people on this and they are unanimous on two things.

First, the Cardinal has no legal authority to dissolve the board or appoint new members. He is the patron of the hospital, an entirely honourary position.

Second, the board had been successfully cleaned up and was in the process of putting the Catholic ethics code into place in the hospital. The problem members have been so incensed by this that they have resigned and their replacements were quietly getting on with the task of putting all to rights.

I spoke to the head of the orgainsation that has been working to restore Catholicity to the hospital and he said he was "utterly baffled" by the move and could not guess why the Cardinal was interfering. Particularly as he had no legal standing to make the demands.

The facts are being distorted by the press (since when are we in the habit of taking at face value what the Guardian says about anything to do with the Catholic Church?). The board has not been sacked. The Cardinal has asked them to resgin voluntarily since he knows he does not have the power to sack them.

Whether they will or not, is up for discussion.

But if I were a recent appointee who had been working to bring back the Catholic nature of the institution, I might have reason to be miffed if I were suddenly and out of the blue asked to resign by the very man whose wishes I were trying to implement.