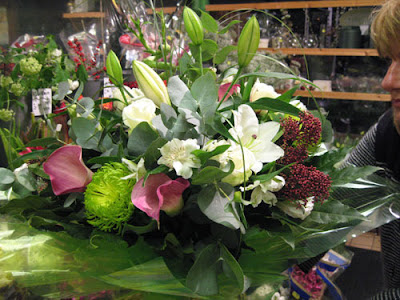 I was out visiting this afternoon. I went to see a Asian family, what I hadn't realised was that the middle-aged son of the family had died about six months ago. Being Asian they had taken photographs of everything, including the celebrant of the funeral. I asked why as they were Catholics they hadn't had a Catholic funeral, "But we did, Father. We made sure that he had a Catholic priest". It was at the cemetery, just a burial, no Mass. The photograph showed a fey middle aged man wearing a biretta, a stole, a cotta and those silly shoulder capes worn by high church Anglican vicars.
There had been a protestant minister, who I am told was the boyfriend of one of the local undertakers, who had been feigning to be a Catholic priest two or three years ago, but I thought we had stopped that. If they couldn't get the real thing, not that they tried hard, he impersonated a priest.
Although no sacraments were celebrated, the funeral is itself a sacramental, in exceptional circumstances a Catholic layperson may celebrate a funeral, but passing someone off as priest to a grieving family is not only a serious sacrilege but it strikes me as being the most wicked act of deception against the bereaved. When I find our which firm of undertakers perpetrated this vile act I will ensure that they are banned from this Church and if possible every other Catholic Church in Brighton.
at February 26, 2008

Absolutely right Father. I banned one undertaker from my Church until he publicly apologised (I won't bore you all with the details). On two occasions I had the family change the undertaker from him--when I explained my reasons they were horrified and happy to change. I made sure I didn't recommend one undertaker over another though. That could be construed as favouritism...

That is so sad Fr Ray. Perhaps, if it is possible, they may be open to a Catholic funeral Mass 'after the event' so to speak for the family, nearest and dearest, followed by a 'proper' Sacramental ceremony at the cemetery. I wouldn't know the in's & out's but if it were my family situation and this horrid 'double act' had been pulled on me, my greatest comfort and joy would be in being able to have Holy Mass said for the deceased family member and a ceremony at the graveside - with a REAL Catholic Priest.

And then I would go gunning for the impostor! (Only joking). Did you say he was the boyfriend of a local undertaker - many female undertakers in Brighton then?

It's a sign of the times Father.Everybody is" AT IT"
Thieving is becoming normal behavior,the country and the local authorities are all a bunch of pickpockets,posing as a Priest to steal a few shillings is Modern Day entreprneurship and mugging old people in the street is just a natural progression.

Father, the cape you refer to is part of a Bishops cassock called a chimere (or zimarra or simarre or simar) - I know at least one priest who wears a black one - the reason being that he is a canon lawyer - he also has a special ring because of his position in the Church. So it is possible for a Catholic priest to wear one. I am not fully sure what his jurisdiction is (he is now retired) but I would be very interested to find out more.

Go for it, Father, and while you're at it, get the firm of undertakers the biggest wave of negative publicity possible.

"Wicked deceit" is the sort of thing that lands you in Hell.

Anon.,
The cape, the mozzetta signifies jurisdiction, it is never worn "in choro" except by a prelate. A parish priest, etc - not a curate, though I maybe mistaken - may wear as "abito piano".

I think you're quite right in your approach to these people.

I also think there's a trading standards issue here. If this were, say, a builder claiming qualifications he didn't have, then I would certainly suggest that a complaint should be made and I would hope that trading standards would be willing to prosecute for the sake of future customers. My own limited experience would suggest that they would.

Of course, it might on balance be a bad thing to encourage the family to complain in these sensitive circumstances, but some recourse to the trading standards people might be worth considering and might also be useful threat to make to the malefactors when you find out who they are.

What disgusting behaviour! Is it posible to report him to the police? I assume he was paid a fee and was therefore guilty of fraud.

The last thing I would want is to disconcert the family. They believe they had Catholic priest celcrate the funeral.

Father, I can appreciate you not wanting to hurt the feelings of a given family, but if these "people" are not sorted out they will keep doing it AGAIN and AGAIN to more families.

I would be very suprised if this didn't fall under the laws of fraud. Most places are very particular for standards regards "the funeral industry" -- I would see if it were possible to get that undertakers license yanked if I could or sue them to the hilt.

I'm very surprised that the family did not FIRST seek a priest, even before they sought an understaker.

Personally, I think it's too bad you can't just punch the guy(s) who did it RIGHT IN THE SNOUT.

If I were on that jury I wouldn't convict.

Is it not "fraud" in the legal sense on somebody`s part to effect a deceit like that on the bereaved ?