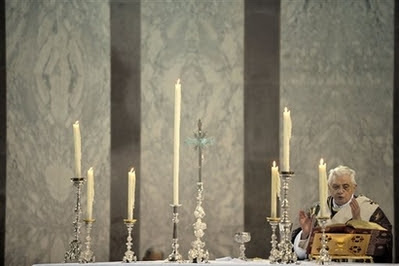 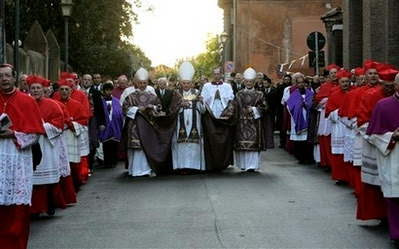 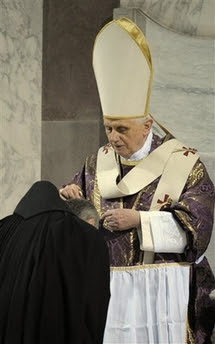 Pictures of the stational Mass at St Sabina, withits procession are just becoming available. It seems that the Pope's MC is continuing to restore a sense of splendour. I will up more as they become available.

What is the white apron like "thing" the pope is wearing around his waist when administering the ashes? I'm assuming it does serve the purpose of an apron, to keep the ashes from any possibility of spoiling the chasuble beneath - is there a name for it?

Gem, it is gremiale, it is used to stop ash, oil getting on vestments. It is really a towel and has a special significance on Holy Thursday when Pope, bishop, priest remove their vestment, wrap a towel round their waist, in imitation of the Lord, to wash the feet of 12 men.

Thanks Father, I had heard the word, but never bothered to look it up!

BTW, I've tagged you for a Bloggers of the World Award.

most churches ususlly used an amice, tied round the waist and used as an apron. also sometimes used for washing of the feet on holy thurs, btw

Is the Pope receiving the ashes on his head rather than his forehead???

These photos suggest to me a continuity with the Church's rich liturgical history which, frankly, I thought was gone for good, or at best had been "marginalised" to a few Ecclesia Dei communities.

Similarly, The Feast of the Baptism of the Lord was a not unimportant date, and look what happened in the Sistine Chapel on that occasion !

And all in front of the cameras, so that these pictures have been shown around the world.

The Pope seems to be demonstrating that spirit of continuity which he spoke about in December 2005.

In Lille, they seem to be demonstrating that spirit of discontinuity, or rupture, condemned by the Pope in December 2005.

As Fr. Z would say, "little by little" the Church is reconnecting with its tradition.

Starting at the top !

to be demonstrating the spirit of discontinuity