Isn't it unlike him? 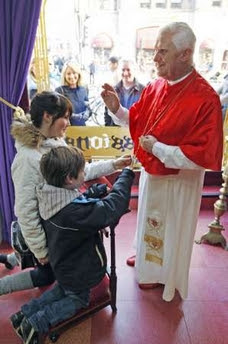 Children kneel down and touch the crucifix of the wax version of Pope Benedict XVI in the Madame Tussauds Museum in Amsterdam February 18, 2008. The figure of Pope Benedict XVI, the first to be made of the reigning Pope, was made at the Tussauds Studios in London over a period of three months. The figure was created on the basis of research material and with the knowledge of the Vatican. At the end of April the figure will be transported to its definitive destination, the Berlin branch of Madame Tussauds which has yet to open.
But why is it so unlife-like?
at February 19, 2008

I suspect it's probably because the Holy Father wouldn't sit for it!

They probably just made a new head and stuck it on an old body from some now unknown celeb, thats often what they do!
It would be interesting to find out which celeb's body they did use. Any speculations?

It bares a striking resemblance to one of Hexham and Newcastle's longest serving and most loved Priests, Fr John Caden! (Who, incidentally, looks nothing like the Holy Father!!!)