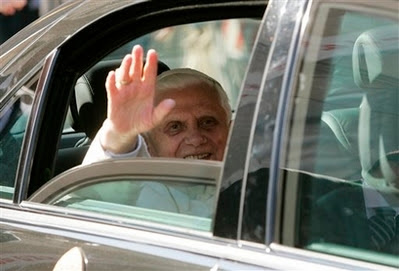 Pope Benedict XVI Monday called for those caring for the dying to be granted "death leave" even as he reaffirmed the Catholic church's strong opposition to active euthanasia.
Like maternity leave for couples having children, "similar rights should be accorded to close family members at the moment the illness of their loved ones is at a terminal phase," Pope Benedict said at a Vatican gathering on incurable illnesses.
He called on society to support families caring for the sick, arguing "a humane and interdependent society" could not do otherwise.
"A greater respect of individual human lives inevitably comes from real interdependence of everyone," the pontiff said, saying this was one of the greatest challenges of the moment.
Pope Benedict at the same time reiterated the "firm and consistent ethical condemnation for all forms of direct euthanasia."
Posted by Fr Ray Blake