The Fragility of the Church 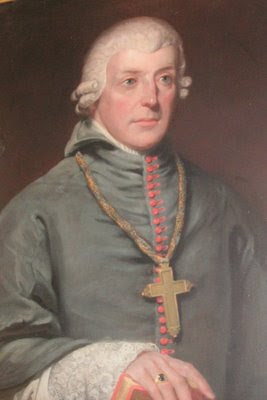 Fr Schofield has some interesting stuff the Vicars Apostolic, those bishops who ruled the Church, not just in Britain but throughout the Empire, before the restoration of the hierarchy in 1850. For the most part they lived rather low key lives. The clergy that worked with were often difficult, and even apostatized on occasion.

Despite their fragile position and limited resources, their jurisdiction was technically vast and included the colonies, though they never visited these distant lands and simply resolved disputes, granted faculties and (whenever they could) sent out priests. Sometimes the colonies proved to be a useful 'dumping ground' for troublesome priests. A striking example was William Simpson, who had held four appointments in the Northern District but ‘made havoc of every one of them’ and, after Bishop Giffard paid off his debts, squandered the money on women and married in an Anglican church. After imprisonment for debt, he seemed to be repentant and was commissioned by Giffard for work in the West Indies. He soon apostasised from the Faith and was presented to an Anglican living on Nevis, although he seems to have been reconciled to the Church at his death in September 1735.

Those outside the Church often think that it is a power based institution, Fr Schofield’s short piece illustrates what the Church really is; something which is incredible fragile, held together by charity rather force, limping on from age, dragging itself from generation to generation. It works because men and women are willing to give up their own freedom, choosing to submit to it.
When one looks at its history what amazes me is that it has survived, and remains true to its founder. Those great episodes of sin, those times when it hung on by its fingertips, and seemed almost to be extinguished, are for me, signs of the power of Divine Grace.
Posted by Fr Ray Blake

Thank you, Father, for the link to the fascinating post by Fr. Nicholas Schofield on the period of the Apostolic Vicariate in England.

The position of the Vicars Apostolic was indeed a fragile one, their power base more or less non existent.

Yes I've heard it said, particularly of the reign of Pius XII :
"Thou art Peter and on this rock I will build my Church. There you are. On this rock. Monolithic. Centralised control."

Oh dear, I doubt there have been many periods in the history of the Church when this was so !

The reality is far more complex.

Pope's have supreme authority, but they are not always very powerful.

John-Paul II seemed to prefer to leave Cardinal Ratzinger, the Prefect of the Congregation for the Doctrine of the Faith, to keep the lid on.

Pope Benedict XVI is sometimes criticised for introducing his reforms too slowly, but he has to proceed with caution, winning over hearts and minds to his policy of ressourcement.

There would be little point in him sitting in Rome, issuing thundering anathemas.

He knows he has to carry the majority of the bishops with him.

With his urbanity and his shy smile, he has the priceless gift of being able to relate directly to the people. (He also has a great mind, of couse,)
These are great assets and I am sure he will continue to use them.

Love and obedience can, I suppose, be required by the Church, but they have to be freely given.

Yes, Peter carries the keys to the kingdom of heaven.
He has the power to bind and loose.

But God endowed men with the gift of free will, and ultimately they choose.

Did one of the Napoleons once say to a Pope: "I will destroy the Church"...and the Pope replied, "If my cardinals and I have not been able to manage that, neither will you"

James, It was Napoleon to Consalvi Sec of State to Pius VII, his reply "But Majesty, the clergy have been trying to do that for almost ei9ghteen hundred years."

The majority of the later Vicar Generals were narrow, Cisalpinists with no imagination and too much caution. They almost prevented Catholic emancipation by their timidity. It needed a Wiseman to shake them from their insularity.

Catholic emancipation was brought about not by negotiation but by Daniel O'Connell.