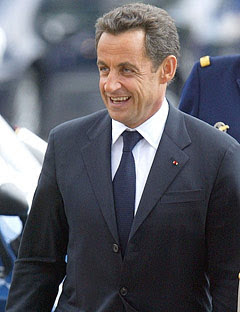 (CWNews.com) - French President Nicolas Sarkozy has spoke out in support of recognizing "the Christian roots of Europe."
At a meeting of his political party, the Union pour un Mouvement Populaire, Sarkozy said that leaders of the European Union were wrong to exclude an explicit reference to Christianity from the language of the proposed EU constitutional treaty. (The French voters rejected that treaty in a 2005 referendum.)
"We erred when we turned our back on the past, and in a certain sense turned our back on our roots, which are obvious," Sarkozy said. Echoing the argument that has been advanced by Popes John Paul II and Benedict XVI, the French leader said that without a basis in Christian culture, the European Union will have no firm foundation.
"If we reject our past, we are not ready for our future," Sarkozy said.

He is talking about metaphorically turning one's back on our roots, more often than not the Church has literally turned our backs on the past. What sign does that give? I can't help thinking that the Church's disconnection with its cultural roots has been one of the most causes of the sedcularisation of Western culture.
at February 01, 2008

Bravo and Vive la France - eldest daughter of the Church!
Sarkozy - a Frenchman with le backbone.

The President of France !
Mon dieu.

He must have been reading, and been impressed by, Pope Benedict's condemnation of the hermeneutic of rupture.

It seems to me that the Church had first to acknowledge its own spiritual and liturgical heritage (which Pope Benedict XVI has done), before it could lecture the European Union on ignoring its Christian heritage.

Even after the decline of medieval Christendom, which gave Europe its great cathedrals and abbeys, the Catholic Church continued to exercise a civilising influence on men, particularly through its art and architecture, music and philosophy.

Most of all, of course, its deep and age old spiritual roots gave Europe a firm foundation until, I suppose, the so called Enlightenment, the French revolution, and other modern diasters.

I literally couldn't believe it, and I still don't understand it, when in the 1960s men (bishops, prelates and priest, no less,) attempted to cut off the modern Church from its spiritual and cultural heritage
in a new and revolutionary way.

That spirit of discontinuity is not dead yet, not by a long chalk.

Nevertheless, let us not forget the massive crowds which turned out recently in support of Pope Benedict.

And let us not forget how the Pope, of all people, adroitly gave the secularists a short lecture on pluralism !

If other political leaders echo the words of M. Sarkozy, then perhaps the secularists really will begin to see the writing on the wall.

Let this happen !
We don't want a pagan Europe.
It's not too late to rediscover our Christian heritage.

isn't he divorced? That hardly seems a good example to set for a country.

"I can't help thinking that the Church's disconnection with its cultural roots has been one of the most causes of the secularisation of Western culture."

Must go and get ready for Fr Tim's Missa Cantata at Blackfen.

It's nice that he praises Christianity. Stage two might be adopting some of its precepts; attempting a third marriage before a mayor today is scarcely consistent.

Do agree,Father but it is customary for French leader to agree with the Church but fail to keep its teaching.

As far as I can see, some Frenchmen, including politicians, take a laxer view of public morality without necessarily causing public scandal.

President Francois Mitterand, in an interview, was once asked if he had a mistress.

Both his wife and his mistress attended his funeral and burial.