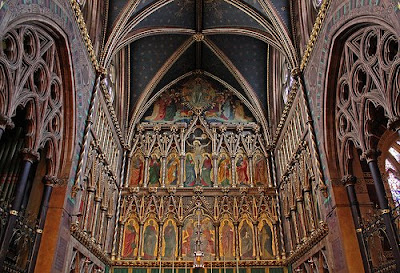 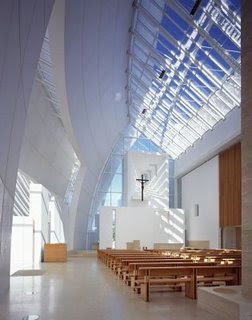 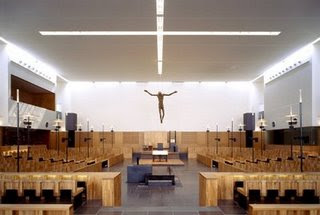 I do not believe the problem starts with the "Modern Movement", which is now over 100 years old so the term is a misnomer. The modern movement is in any case merely an approach to function and the use of materials. The church is a space in which to conduct the liturgy, but the liturgy has become degraded as a matter of deliberate policy, consequently, the architecuture will reflect the liturgy. This would be so merely as a consequence of an architect following the brief and the modern movement as such is not responsible.

An architect working within the framework of the modern movement, and asked to design a church to accomodat the traditional liturgy and for the singing of chant, without the aid of a sound system, should be able to produce a perfectly satisfactory building. The disastrous buildings illustrated have come about primarily because the client's brief led to those design solutions.

[OFF TOPIC]
You`re on page 21 of The Mail, Fr Blake. Marie Stopes stamp.

The last photo is of the Franciscan Church of St. Mary of the Angels in Singapore. It would make a very nice ping pong court if a table replaces the font. Or a courtroom.

Thanks for the link Father. This essay was excellent as is usual for Fr Nichols.

Don't read the comments (online) at the bottom of that Mail article: too depressing. It seems the majority of people are apparently in favour of compulsory sterilisation. I think they probably assume it will happen to others but not them. Fools, and selfish fools at that.

Henry is right in that the main ones to blame are the the people who tell the architects they want a "modern" church building designed:

"We want a church whose primary function is to be a space for our self-centred modern liturgy. We'll have all the action in the centre, with plenty of seating all around. Something minimalist, please, and of course functionalist. You know the sort of thing. Plenty of bare concrete, and with some hideously expensive bits of stone or polished wood here and there. No plaster statues. And no pastiche. Oh, and be a good chap, and make it look as like a modern garage / warehouse / lecture hall as possible, would you."

The same people are to blame for the wreckovation of traditional church buildings. And it is of course people of the same mentality who wrecked the liturgy itself.

In this context, it is perhaps a little unfair to blame the architect for following his client's brief.

Recusant - yes I know.. the anti-comments are horrible.

The point is : This is the first time I've seen the nationals even cover this.. AND this one has included a Catholic voice and given it due respect. They`'ll always try and "balance it up". That's the way of the world.

Fighting in the open market place is always much more powerful than a sycophantic pile of introverted goo read by three people in The Universe.

Quite a good number of people(mostly non-Catholic, probably) will have read that and thought "Blimey, that Fr Blake has a point. I`d never thought of that."

There's good reason to believe The Mail only picked it up from the Catholic blogosphere in the first place, as well....


Never underestimate the power of the Blogs.

I suspect that an architectural firm like Herzog-de Meuron could make an excellent job of designing a church for the EF with Gregorian Chant.