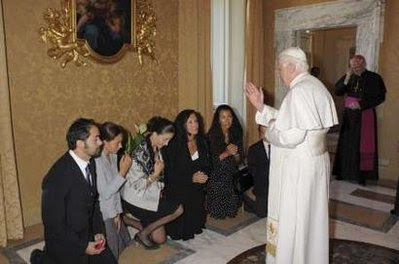 Freed French-Colombian hostage Ingrid Betancourt (3rd L) and her family is blessed by Pope Benedict in a private audience at his summer residence of Castelgandolfo September 1, 2008. Betancourt, who was rescued by the Colombian military in July after more than six years in the jungle held by the Revolutionary Armed Forces of Colombia (FARC), had wanted to thank the Pope for the Vatican's support during her captivity.
The 46-year-old, seized by guerrillas while campaigning for Colombia's presidency, said Benedict became a direct source of hope when, after a typical day of forced marching through the jungle, she heard him speak on the radio."As soon as I switched the radio on, I heard the voice of the pope who was saying my name. You cannot imagine what this can mean to a person in my situation, a prisoner, to understand you have not been forgotten."Pope Benedict made a number of appeals for her release and that of other hostages.
Although a Catholic, Betancourt said she had never read the Bible -- "a dusty old book" -- before her capture, but then had the time to read it "20,000 times" and now considered it a life guide. "There's an instruction manual for happiness and it's called the Bible," she said.
at September 02, 2008

Fr,
Thanks for the pic. Here's a quote from the Int. Herald Trib. on iht.com.
'Betancourt told the pope that once, after a day ong forced march between rebel camps in the jungle, she collapsed in a hammock exhausted and dispirited, only to switch on the radio and hear Benedict's voice speaking of her plight.

"It's hard to explain the psychological effect this has on a prisoner, what it means to know we hadn't been forgotten at a time when we thought we didn't exist," Betancourt said. "The voice of the Holy Father was like a light....."

She said she told the Pope about her distress for the hundreds of hostages FARC still holds.....
"The pope is pained by the suffering of the prisoners," she said. "I know his prayers are also dedicated to obtaining the freedom of all the prisoners and peace in my country." '

Well that's decided the focus of my rosary tonight!

Something similar that I've heard on a number of occassions -

What an amazing lady.