Re-enchanting through marbling and gilding 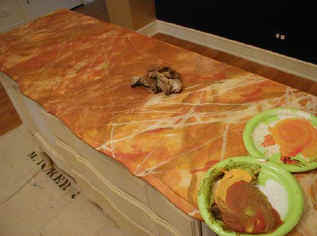 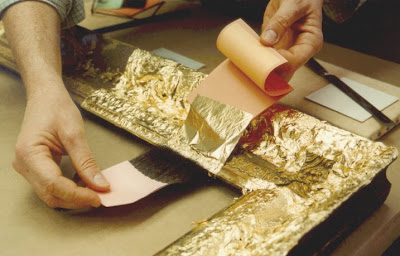 Occasionally I get a visitor at Mass who say they read the blog. I had one today, a teacher, I think he must be teaching R.E., he was at a Catholic Secondary School as far as readers are concerned at "somewhere in England". In a brief conversation he told me he and some of his colleagues are concerned about re-enchanting the faith, and consequently the liturgy, for their students. They seem to have a deacon as a school chaplain who is quite enthusiastic about their approach. So what is he doing?

The last two, are so they can do up their school chapel and altar, I just think that is wonderful! So often we underestimate the importance of the visual for children, that which we do give them is so often ephemeral.
at September 14, 2008

When I was a boy at school, we were taught the history and rudiments of plainchant, and learned several Mass settings.

But we never taught hand marbling or gilding ! I had always supposed these accomplishments were limited to a very few. Whatever will they be teaching next ? Illumination ? Calligraphy ? The history of incunabula ? The possibilities are endless.

Apparently, civilisation is not (yet) dead.
.

Good man, that RE teacher. That is quite wonderful and visionary. I play Gegorian plainchant during times of individual work. I notice a definite response. Especially among Muslim pupils. We have to rely on what has worked for the church so well for many, many years. The saints can`t all have been wrong.

It truly evangelises, in a way that very badly sung modern ditties do not.

This is a superb Blog, Fr Ray. Do keep going.

This sounds very encouraging. However, I would say that the main thing needs to be reintroducing sound Catholic doctrine into our Catholic schools.

However, the problem is that many teachers are afraid to step out of line by teaching orthodox Catholicism. Subjects such as the Four Last Things are practically taboo in the classrooms as far as I can see.

Teach them book-binding and they would have very useful 'church' skills indeed.

Not sure I have any marbling or gilding skills, but I'm kicking off with using Fit for Mission - Schools as a guide for Chaplaincy starting this year, hopefully this will bear fruit.