A Hero of the Eucharist 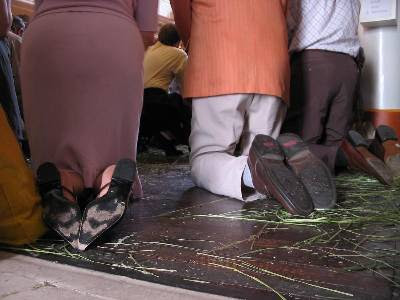 I was talking to a man, "J", after our Traditional Latin Mass a few months ago, he was in his early forties. He said I like coming to it "...because I don't feel forced to come to Holy Communion". When he couldn't go to the TLM he went to the Polish Mass. He hadn't been to Holy Communion very often for ten years.

"I come to Mass every Sunday," he said, "I am living with "M", she is divorced. Most Lents we have determined to live as brother and sister, sometimes it works and I go off to Confession, receive absolution and receive Communion, normally a few weeks after Easter our resolution breaks down. The last couple of years we haven't got very far, so I haven't been to Holy Communion for three years. I want to come, of course I do, but I know I know what Jesus said about the permanence of marriage and marriage to divorcee. It would be hypocritical to receive Him and not live by His teaching."

I of course suggested looking at an annulment, he said he had tried that but "M" just couldn't bring herself to go through the procedure.
I was so impressed by this man, so impressed by his extraordinary love for the Blessed Sacrament, impressed by his honesty and the heroism of his Christian life.
I think one of the good things about this parish is that not everyone comes to Holy Communion, our Polish Mass only about a half of the people recieve, I think about the same proportion receive at the TLM.
I would love to hear a pastoral letter that extolled faithful people like "J". I really do believe that we should encourage people to see it is a good and holy thing not to come to Holy Communion.
Posted by Fr Ray Blake

When we were small ages 7,8, 9 etc we never presumed to go to Holy Communion..it was only after Confession & a lot of soul searching that we went. None of this line by line approach & free for all. Mind u at my children's primary school they all go to confession before their weekly Mass.

In one of A.N. Wilson’s books, written when he was still a Christian, he said that a priest had told him that after the new rites came in , it was only the goody-goodies who went to Church. In many parishes Holy Communion is practically compulsory, particularly if they adopt the habit, of pass keepers dragooning the congregation up to Communion row by row. It can be quite embarassing not to go to Communion in such circumstances. There are people, who for what ever reason, don’t feel worthy to receive the Eucharist at every Mass they hear. If they don’t have the option not to go to communion, they will probably just stop going to mass

I wonder if "M" has children. It is surprising the number of Catholics who think the church would consider their children to be bastards if an annulment is given. But I've run into quite a few Catholics who think that and don't want to go through the process because of that supposed reason.

Fr. Blake. did you enjoy your lunch with Fr. Z at the Criterion at Piccadilly Circus? I hope to meet you too next year when I visit my cousins in Boston, Lincolnshire.

This is an awesome story, and proof that the Church's teaching can be lived out faithfully.

I read a story of a couple one or both of whom were remarried, living in a one-room flat. They came back to the faith, but can't afford to live apart. It was heart-rending and immensely inspiring to read about how difficult it was for them to live as brother and sister, and how hard they fought to live chastely.

In the early 1960s, it became fashionable to hear priests and R.E. teachers talking about the Mass as a meal, with the additional comment : "Well, you don't accept an invitation to dinner, and then sit there and eat nothing, do you ?"

I could never agree with this theology of the Mass.

But I can see how the emphasis on the ritual meal, and the miraculous feeding, and reception of Holy Communion as if it were an essential and necessary part of attending Mass (which it isn't) could put a lot of people off going to Mass.

And no one should ever be made to feel awkward about not going up to receive Holy Communion. That is very wrong.

what is so "impressive" about a man living in adultery?

The commmand is there. Live it or be a hypocrite.

It's a lovely point you make, Father and that pastoral letter sounds like a wonderful idea. I do wonder about something, though, and perhaps you or one of your readers could explain it for me.

To wit: is a confession made just for Easter communion sincere and valid if there appears to be no persevering intention to actually change? He seems to be saying that he goes through with a ritual once a year to receive communion and then it's business as usual a few weeks later.

Now, dare I say it, all of us are recidivists. How wilfully we are is perhaps known only to God. But I don't 'get' how living chastely in Lent only as an annual precursor to communion - followed, as he admits, by a rejection of what was undertaken in confession - is heroic.

I'm not judging this man and don't believe he's any worse than any of us. I really stress that. But I just don't know how efficacious his story is pastorally and didactically. Not because of his recidivism but because of his (presumptuous?) acceptance of annual, programatic failure.

It could even bolster the sneering critique of confession posited by those who see it as an abracadabra pretense.

This is more in the way of theological uncertainty of mine and is not meant to be a criticism of this good man. A man in love with a woman and Holy Church is a gem, to be sure.

May God bless and guide him and his beloved. And you, Father.

c.l.
I understood he to mean that with the Lenten discipline he had the desire and intention to break with sin but once Lent passes that desire breaks down. Hence, over the last few Lents he has neither confessed or communicated, because of the lack of that resolution.