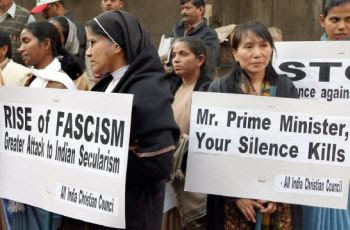 Again and again one hears of outrages in India against Christians, today the gang rape of nun has come to light!
It makes one wonder if the Indian government is capable of protecting its citizens. What we hear from Tamil Nadu, from Keralla and most especially from Orissa, is that if they are Christian the government is not interested. In some parts Christians are outlaws in their own country. Letters and everything else fail, either Christians plead in the streets for justice or flee to the forests.

India's Orissa state government has been accused of failing to take action against the perpetrators of the gang rape of a 28 year old Catholic nun.
The Hindu reports the Orissa government has failed to take any action against those who committed the gang rape of the nun and the brutal attack on a Catholic priest who courageously resisted their attempts to force him to participate in the atrocity. .......

"Either Christians plead in the streets for justice or flee to the forests."

Sometimes in history Christians have been pressed so hard that they have been driven to create a third alternative.

That alternative was applied by the Teutonic Order in the conquest of pagan East Prussia where my mother came from. (I should hasten to add that it was the bubonic plague and famine of 1709-1711, not the Germans, which wiped out the Prussian language).

It is at times like this when the Douai-Rheims translation of Deuteronomy 12:3 gallops in the direction of blogs like this one:

Overthrow their altars, and break down their statues, burn their groves with fire, and break their idols in pieces: destroy their names out of those places.

I assume that applies to that lilac-faced abomination Rama that VHP waste their time worshipping.

Since the Christians in India sadly don't have the strength of numbers to do as did the gallant Brethren of the Cross, I think it may be high time to write to the Home Secretary to ask him to put Vishwa Hindu Parishad and its youth wing Bajrang Dal on the list of terrorist organisations.

Unfortunately, India is not a party to the International Criminal Court, so there wouldn't be any joy in writing to the Prosecutor about genocide and crimes against humanity.

A stern letter to the Indian High Commissioner wouldn't go amiss though.

Sounds like more refugees will be on their way soon. Could do with some nuns anyway so they would be an asset.

In March, Sweden got its first Cistercians since the deformation, they are monks who have come from Vietnam and moved into one of the old Cistercian sites, of which there are many.

Interesting comment about Old Prussian, I had not realised that there were more of these Baltic Indo European languages. Of course Estonian is not an Indo-European language, nor Finnish or Sami, they are Finno-Ugaritic and related to languages spoken by tribes in Siberia.