When is "dead" dead 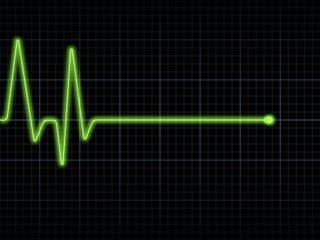 The Pope carries a donor card according to The Times, whilst L'Osservatore Romanum has a story about the Ponifical Academy of Sciences debating when the moment of death actually occurs.
The traditional moment of death was when there were observable signs of decomposition or rigor, up until when it was judged the sacraments could still be given.
The modern understanding of death is when brain activity ceases, after which organs can ethically be taken. The problem here is of course is the distinction between deep coma and death.
at September 05, 2008

If you are young, watch it, they will take us for spare parts. If you are old, all the parts are knackered anyway so we are safer, only they like to bump off the old 'uns to save on pensions.

As I understand it, the original justification for using brain death was that it was an alternative but equally valid manifestation of death, defined as the "permanent cessation of the functioning of the body as a whole". However, although it has become established as a valid criterion for death, it is increasingly acknowledged that it does not, in fact, mark death.

But, instead of back-tracking, this new understanding is being used to argue that since we already harvest organs from people who are not really dead why not go further and harvest them before even brain death as long as the prognosis is sufficiently poor and the donor has agreed to this in advance.

Further, this country is alone, or virtually alone, in accepting the death of the brain stem alone as sufficient to diagnose death. Elsewhere it has to be the whole brain, including the upper brain and harvesting on our less stringent criterion would be regarded as murder.

The Catholic Church has got it right once again and science follows in its wake by now acknowledging that death does not occur until some time after clinical death (cessation of heartbeat and breathing). Otherwise every rescusitation would be a resurrection!

Donating organs after death is a noble and proper thing to do. But I do not carry a donor card and if a system of presumed consent is set up in this country (as our PM advocates) then I will opt out.

Chillingly, hospitals are to be rated according to the number of dead patients they "convert" into donors.

It is hard to imagine a more sinister incentive for the wholesale abuse of vulnerable patients.

There is, however, a yet more fundamental objection to the opt-out proposal. This is the serious doubt whether people whose organs are harvested are indeed dead.

All the evidence suggests that organs are harvested not from the dead but from the dying. In other words, at the time the organs are removed the patients are still alive.

This is because, in these cases, the criterion doctors use to decide that someone has died is the death of the brain stem. This is said to be "brain death", and thus death itself.

However, it does not follow at all that the rest of the brain has also ceased to function. Yet no tests are carried out on other parts of the brain to establish whether all activity there has actually ceased or not.

As a result, people are declared dead while their heart is still beating unassisted and blood is still circulating round the body. Most of us would think such patients are not dead but very much alive.

Indeed former transplant doctors, who became so horrified by the implications of what they were doing that they abandoned the practice, say that organs for transplant are only viable if the donor is still alive - since when the body is really dead the organs become useless to anyone else, as they die too.

Brain stem death is in fact merely a convenient definition that allows surgeons to remove organs from a living body while they are still being nourished by its blood supply.

Such observations provoke outrage in transplant doctors who claim there is no basis for such "scaremongering", which will cause more people to die because potential organ donors will be unreasonably frightened off. But among such doctors, their own behaviour gives the game away.

Some give "brain stem dead" patients a general anaesthetic before removing their organs. But whoever heard of anaesthetising a corpse?

The reason they do it is because of a sharp rise in blood pressure during the organ removal.

Some doctors claim they administer the anaesthetic simply because it stops the excessive bleeding caused by this blood pressure rise.

But a rise in blood pressure during any surgical procedure is an indication that the body is experiencing physical distress.

Dr David Hill, a retired anaesthetist who has long expressed deep concern about organ donation, has written that if patients react in similar fashion when their organs are being removed, the most logical conclusion is that they are not in fact dead.

In recent years, "brain stem death" has been increasingly questioned as we realise how little we know about the brain.

Doctors are discovering that, among patients in a persistent vegetative state whose brains are presumed to have stopped functioning, there is in fact a large amount of brain activity.

The implications for what patients presumed to be "brain dead" might be experiencing are simply unknowable.

More and more experts have been expressing increasing concern about brain stem death and organ donation.

Three doctors wrote in a medical journal last year that declaring patients dead for the purposes of harvesting their organs was in effect a fiction, and that prospective organ donors were not being told the truth.

And a professor of philosophy and expert in medical ethics, Michael Potts, has drawn the horrifying conclusion: "Since the patient is not truly dead until his or her organs are removed, it is the process of organ donation itself that causes the donor's death."

In Britain, however, the medical establishment backs organ donation and the proposed opt-out scheme.

This is because the British Medical Association and the medical royal colleges long ago lost their own ethical plot.

Renouncing the core medical precept, "First do no harm", they have come to believe instead in the amoral doctrine that the end justifies the means.

As a result, from abortion, embryo research and cloning to starving and dehydrating "dispensable" patients to death, respect for human life has been replaced by the belief that individual lives are merely instrumental to the creation of the happiness of the greatest number.

This way lies the most alarming infringement of human rights and a descent into tyranny.

A system the public believes embodies the highest form of altruism rests instead on deception and unlawful killing. Far from being forced into an automatic/opt- out donation system, people should finally be told the truth.

Somewhere down the line large sums of money are being made,human nature as it has become must lead to shortcuts.

There have been cases ,one quite recently in America where the organs were about to be harvested when the "donor" woke up and is now leading a normal life.

There have been many instances in rural Ireland where the "dead" have woken up during the Wake.

In para 68 of his encyclical "Evangelium Vitae" John Paul II stated "...the donation of organs, performed in an ethically acceptable manner, with a view to offering a chance of health and even of life itself to the sick who sometimes have no other hope" nurtures the culture of life that the Church seeks. In the Compendium to the Catechism (para 476) we find that "Before allowing the noble act of organ donation after death, one must verify that the donor is truly dead."

So, the Church clearly teaches that organ donation is not only good, but noble. The problem, of course, is how one verifies that a person is truly dead.

I believe that it was in the late 1960s or early 1970s that what has been termed the 'Harvard Report' was responsible for the change in understanding of when death occurs from the cardio-respiratory criterion to that of the neurolgical criterion, although the former continues to be used. John Paul II spoke of this more than once, probably most clearly in his address to the ICTS in 2000. In that speech, the he clearly backed the neurological approach, but added the caveat that one has to make absolutely sure there is a complete cessation of brain activity. Being the great respecter of science that he was, JPII also said that it was not within the sphere of the Church to determine such "technical decisions" (his words).

In this current situation, it is vital to avoid declarations which are emotive or simplistic, as such an approach is never helpful in a discussion.

In this debate, the Church's mandate is to speak about the importance of preserving the value and dignity of each human being, and this is what is taking place. The challenge is for the Church to do so in a manner which causes scientists to listen; it is not an easy mission.

The recent article from the respected NEJM to which Pauline Gately refers is certainly worth reading; it is balanced, concise and easy to comprehend.

You describe the NEJM article as "balanced". I do not see it as such since it advocates, albeit in explicit terms and employing reasoned argument, the intentional killing by the removal of vital organs of human beings not actually dead.

This is justified on the back of established practice which, when first advocated, was accepted in good faith on the well-argued grounds (now widely acknowledged to be ill-founded including by Truog) that whole brain death did in fact mark (not just herald) bodily death.

Truog argues that the precedent has been set. It has not insofar as there was no intention at the time to breach principle and deliberately kill in order to harvest. His argument does not, therefore, stack up.

John Paul II's endorsement in 2000 of brain death criteria was based on best information at the time and was heavily caveated.

See:
http://catholicinsight.com/
online/bioethics/article_747.shtml
for his comments and a commentary on them.

He subsequently asked the Pontifical Academy of Sciences to revisit this and I am surprised that they continued to endorse brain death as late as 2006 - in the face of some strong dissent.

It is good to hear that they are looking again.

I fear that, noble as the purpose is, a strict adherence to the principle of securely establishing that death has occured will prohibit using death, even of the whole brain, as an adequate criterion.

I am not sure what you are referring to when you speak of "emotive and simplistic" declarations. I have researched this issue with great care and make no apology for speaking plainly in the interests of ensuring people to do inadvertently grant permission for their intentional killing.

If you are worried make it known that you were a burger addict in the 1990s and they won't touch you.