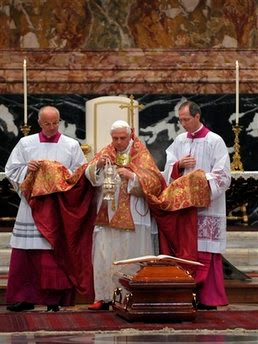 Pope Benedict XVI celebrates the funeral of Cardinal Antonio Innocenti inside St.Peter's Basilica at the Vatican, Wednesday, Sept. 10, 2008. Cardinal Innocenti died on Sept. 6 at the age of 93

Fr Z reports:
After his priestly ordination in 1938, Cardinal Innocenti taught at the diocesan seminary. During World War II, he accompanied his bishop on pastoral visits. “In that dramatic period he stood out for his selflessness and generosity in helping people and saving those destined for deportation. For this he was arrested and condemned to be shot, but the order was reversed as he stood before of the firing squad.” Benedict XVI recalled.
Bit soft in England aren't we?
That is why we need the lives of the saints, especially those of modern times. In recent years there have been some outstanding figures amongst the Cardinals. I was very impressed by Cardinal Castrillon de Hoyos disguising hinself as a milk man to convert a drug baron.

But read this about Cardinal Nguyen Van Thuan (1928-2002) from Vietnam, it is amazing.
Then watch this.