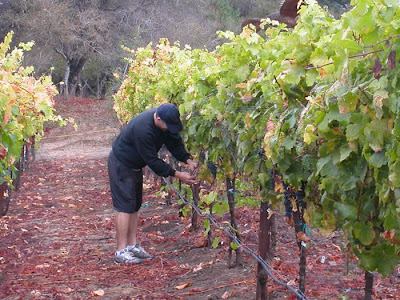 One son says, "yes" but doesn't go and do what his father wants, there is no struggle, in fact there is no real engagement withe father at all. The son gives the old man what he wants to hear, and does his own thing. It seems as if this son is treating his father with contempt. This son chooses the "easy way". He is like the Christian who has all the formulas off patt but is really just another hypocrite. "Am I bothered", no, he is not bothered. He doesn't care.

The other son is bothered, he actually cares, yes, he argues, he squabbles, he moans and he groans, maybe he even has a tantrum even, but he has chosen to engage with the father, he chooses the more "difficult way" and eventually does what he is asked, there is an interior struggle going on. An observerer might think there was a real problem here, a disobedient son who needs disciplining. The other son really presents no problem.

The real problem is with the son who simple says, "yes". The other son is struggling with his own will and the will of his father. We actually see this going on in Jesus on the Mount of Olives as he says, “My Father, let this cup pass from me! Yet not what I will, but what you will”. (Matthew 26:39).
Our faith tells us the will of the God and Jesus are one, but in this little passage we glimpse an inner struggle but in order to do his father's will Jesus has to struggle with human emotions.

St Paul speaking of his own conversion, says, "it is hard kicking against the goad", whether this about a struggle before his Damascus road experience or something that happens after his conversion in the Arabian desert, we don't know.

In the conversion of everyone there is a real inner struggle, in the case of Theresa of Avilla, it showed itself in depression, mental and physical illness. For others the struggle is only apparent after conversion, one says, "Oh that is what it was all about".

The great Carmelite writers identify the first stage of the three stages of the spiritual life, the Purgative as being about this inner struggle, the next stages are Lumative and Unitative. In this inner struggle we experience, "How narrow the gate and the difficult way that leads to life. And those who find it are few".
For the other son "the gate is wide and the broad [and easy] way that leads to destruction, and those who enter through it are many".
at September 28, 2008