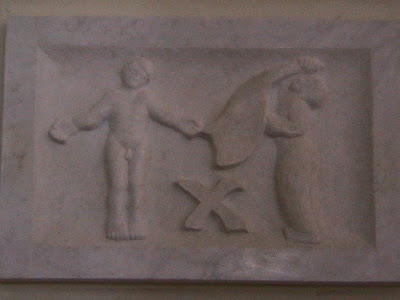 I had an email from someone in New Zealand asking me to comment on some new Stations of the Cross in Christchurch Cathedral, there has been a storm of controversy over them because they show Christ's genitals. Here, I would be much more concerned about the lack of beauty in these stations, they are like so many that would have been carved in the last half century, they are mostly unexciting, the crude faux primitive style is what you expect in most suburban modern churches, that want a "bit of art".

Apparently the artist was forced to cover up with plaster the figure in the 12th Station ,though the 11th has been left naked.
I don't have too many problems with the naked human form in Church, in the past it was quite customary to show the Blessed Mother suckling the Lord or to show the Lord as a child naked, especially when illustrating the circumcision. The Sistine Chapel has several fully naked male figures, including the much reproduced Adam. 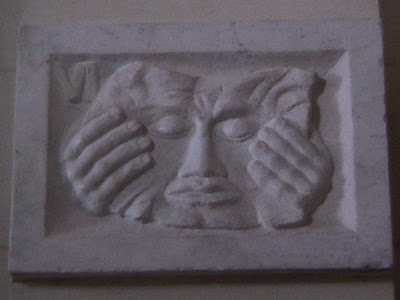 The convention, however is to portray Christ wearing a loin cloth, in the first milenium he would often be wearing priestly vestments, one has to ask why has the artist chosen not to follow this convention. One should always ask why an artist chooses not to follow an iconographic rule. The fact that Christ was probably crucified naked was not something we discovered in the 20th it has been understood since the time of the Gospel, so why is the convention being flouted? 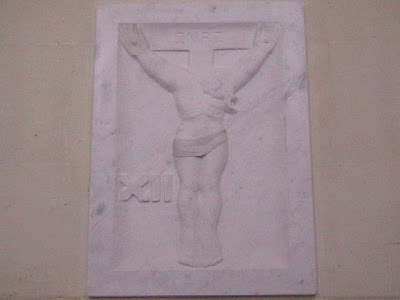 The convention existed because of the Judeo-Christian understanding that only the spouses were allowed to see one anothers nakedness, remember the cursing of the son's of Noah because they uncovered his nakedness. 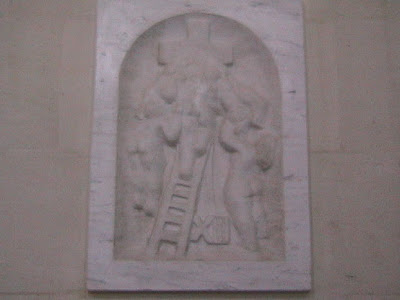 I would also like to know why the Cathedral authorities chose this particular artist, with this particular style, who works in this particular medium, what are they trying to say by choosing him or is it her? Here is a link to other pieces of the artists work.
at September 06, 2008

Stations of the cross as ugly as this drive me nuts! I'm lucky we have very nice ones in my own parish. The kind you can only get by hook or crook now, apparently!

[BTW, I like the ones you got. What did you do with the old set?]

We weren't allowed to change them.

"Anonymous" comments will be rejected: use your real name
I have just rejected two.

If you want them posted resubmit them with a name!

It's funny as I'm reading this post, the Papl Mass is on TV, and they just panned across a beautiful statue of the Virgin Mary clothed in a beautiful robe, with crown on her head, holding a child Jesus on her hand, butt naked apart from a crown on his head. I wouldn't have paid that much attention to the detail if I had not read this post, and cleverly the artist who created that particular statue had a fold of the robe Mary was wearing covering our Lord, keeping His modesty, as it were.

I agree with the previous comment though, those stations are not very nice. I like to see beauty in art reflecting the beauty of the act they depict, if that makes sense.

These Stations are not just ugly they are scandelous. Check out the shape of the Cloak. It is in the shape of the Phalic Symbol and on Station No 13 Mary and the Holy Women are all naked at the bottom of the Cross!!!
Also I am sure Michaelanglo did not paint Christ completely naked.

I was really interested to read your historical resume of this subject in art.

But I trust you agree that we don't need so-called 'artistic' depictions of His physical Manhood - not when we can focus on His most important organ, which we perceive still beating with love for us through the wound in His side.
Vivat Cor Jesu.

These neo-primitive stations are quite ugly, and I'm not favourably impressed by the other sculptures in the link you provided.

I was drawn by your comment that one should ask why an artist chooses not to follow the convention of the time. As you point out, the portrayal of the crucified Christ wearing priestly robes (a beautiful theological image to my thinking) faded somewhere around the turn of the first millennium; this was apparently due to an increased focus on the suffering of Christ - and is, indeed, more realistic.

Like you, I have no problem with a naked Christ, as that is most likely what took place, and it is not necessarily disrespectful. One hopes that an artist who portrays Christ in such a manner would be seeking to bring home the humiliation of crucifixion.

Like gemoftheocean, I abhor what I perceive to be ugly stations; unfortunately, too many of our churches have such cheap, poorly painted stations (and statues) - and I include a plethora of churches built before Vatican II in this observation.

I think (I hope) Gabriele is mistaken about the 13th station. Mary and the women would not have been the ones to remove the body of Christ from the cross - which is what is being depicted.

As for the comment about a phallic symbol in the first station; I have looked but can see none. Am I not looking 'correctly'?

There is a reasonably famous nude Crucifix - in Santa Maria del Spirito Sancto in Florence. It dates from 1492 and is currently attributed to Michelangelo. I've never seen any others.

If I am assigned in a parish with the
stations like these, first thing I will do is look for a hammer and smashed these ugly stations and buried it in the ground. ( No disrespect intended to these images). Commissioned a new artist to create a beautiful and detailed artwork stations or order beautiful ones in catalogue.

I don't have any objection to the nakedness per se except that it smacks of trying to shock. My objection is to the sheer lack of artistic merit. I have now visited the artist's website and I think the answer to the question as to why he produces stuff like this is that he simply isn't very good, very skilled or very imaginative.

I don't understand this "neo-primitive" art. It doesn't mean anything in our culture, certainly not in our Christian culture. It's just ugly, formless, and immature. It pays no tribute at all to the goodness and beauty of God's creation. The artist eschews every hint of realism, and yet insists on portraying Christ nude? That doesn't make sense.

I am not mistaken about the 13th station. You are right it was not the Mary and the Holy Women that took Jesus down from the Cross but those naked figures are definitely female. Most of these stations are not historically correct but as they say "why let the truth get in the way of a good story". It appears the Bishop did not seem to mind. In fact the only people that got treated badly were the ones that protested against them.
As for Station number 10 - I am sorry you are not looking correctly. This phallic symbol has been acknowledged by both catholic and non-catholic and has never been disputed by the "powers that be"
Fr Gary V - how I wish you belonged to our Diocese. While there were Priests that did not approve of these Stations not ONE came out and publicly supported the protestors.

You should see the ones in Clifton Cathedral. Or rather, don't bother.

Is this "artist" a practising Catholic? Seems to me as if somebody's taking the mickey (scuse the pun). How odd that these could be in a Cathedral. They're not only irreverent, they look like they've been done by a not very talented high school art student.