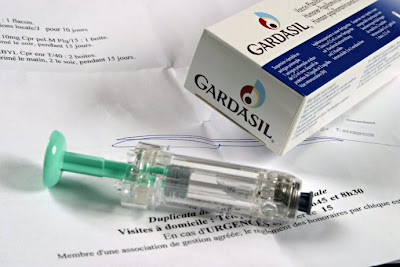 The BBC carries the story about St Monica's school in Manchester and the governors decision not to allow HPV vaccinations to be given on school premises. The age when it is to be given is 12-13.
Catholic Education Service says there is nothing wrong with allowing the cervical cancer vaccinations to be given. I think most of us can agree that preserving the health of young women is always a good.
Of course one would hope that St Monica's is already taken steps to safeguard its charges against HPV by teaching the Gospel and therefore a life of chastity and continence. HPV is only caught by women who have multiple partners.
One might argue that CES's advice presupposes that schools are going to fail to teach the sexual values of the Gospel. What concerns me more than a little is that giving this vaccine will be see to be a rite of passage into a very secular form of adult sexuality. What, I wonder is being done in other school, to counter the notion of "I have had the jab, I can now have sex with who I like".
Another thing that concerns me is that giving the vaccine in school takes the responsibility for a child's sexual and moral health away from her parents. If the school takes care of it, there is no need for family to take responsibility for discussion of sexual and moral health. For us Catholics there seems to be a separation of sexual health from morality, this seems to be very much part of our governments secularist agenda.
Though there is nothing wrong with what the CES says, one always has the suspicion, especially after Fit for Mission, that what comes from them is not the pastoral or prophetic concern of Bishops but the bureaucratic concern of those involved in the smooth running of our schools as part the state system.
Where is the distinctive nature of our Catholic schools?
see also
at September 25, 2008

You forget one important point, father. The girl in question may be of unimpeachable virtue. The man she marries may have a less virtuous past and may carry HPV. If unprotected by the vaccine, her risk of HPV infection and therefore cervical cancer is dependent on her husband's past. It is entirly unjust that she should be at risk because of her husband's behaviour, when a simple measure like the vaccine is available which will afford her protection from cervical cancer.

The provision of the vaccine and the protection of girls from cervical cancer is a good we should encourage. It should go hand-in-glove with proper sex education which emphasises the Church's teaching unequivocally.

I would emphasise that the vaccine without good moral teaching is dangerous but that shouldn't stop giving the vaccine.

Questions of sexual morality aside, this vaccine is far too new and untested for me to consider safe to promote.

Paulinus: Before marrying, either partner can and should be tested for STDs. If a man refuses, the woman should back out, and vice versa.

Paulinus,
as the father of a girl I am of course committed to all reasonable courses of action which genuinely protect the health of young women, and I am glad that you share this commitment. However, several things could be said in defence of the St Monica's governors.

1. Even on your own argument, there is no case for administering the vaccine at puberty, when girls are still four years off from the earliest date at which they can marry. Why not give it at 16, or better still, shortly before the actual wedding? Why at 12?

2. We in the UK are now routinely giving our young people something like 18 (I have actually lost count) vaccinations in their first twelve years of life. As Fr Blake rightly observes, the people with primary responsibility for a child's health are the child's parents. It is ESSENTIAL for parents to make an informed, responsible and free decision in relation to all vaccination programmes. St Monica's is not preventing children from receiving these jabs - it is simply saying to parents: 'You are responsible, so act responsibly.'

I should make it clear that I am not commenting on the effectiveness of the HPV vaccine or its side effects. These are not matters that I have (yet) looked into.

Debbie Vinnedge has a collection of articles (some from scholarly medical journals) about the dangers of the HPV vaccine.

It appears, however, from Vinnedge's website that the vaccine is not derived from aborted human cell lines (like the Chickenpox, MMR, some Flu, and most Hepatitis vaccines are).

She can always get it when she is old enough to make the decision for herself paulinus, which coincidently is around about the same time she is legally old enough to have sexual intercourse.

Here's a novel idea how about the government actually makes an effort to enforce the laws concerning children and sex?

That would be the best protection not just against this disease but many other diseases and also the psychological problems that often accompany becoming sexually active while still legally a child.

The governors of St Monicas decided that the best place for this sort of thing is a Hospital or Doctors surgery.

We are ruled by "Health & Safety" if anything did go wrong some smart lawyer would sue the pants off them and probably the best school in the area would disappear.

My 8 daughters won't be jabbed!
We were having a magnificent debate at home on the subject when a pro-life doctor friend of ours dropped by to help out. Truly providential.

Children have traditionally been vaccinated on their school premises (Rubella, BCG as was) because this is where they are most easily found in the largest possible groups. Thus guaranteeing the beginning of 'herd immunity', babies are vaccinated in the GP's surgery as part of the national programme of care for babies in the years immediately following birth - progressing on from visits by health visitors.

There are good public health reasons for this, and irresponsible behaviour by school governors, e.g. St Monica's, or the wilfully ill-informed, e.g. parents who refuse to give their children the MMR innoculation, endangers all of us.

Cardinal Murphy O'Connor should publicly reprimand the governors and instruct them to allow the vaccinations to go ahead at the school.

Gladiatrix,
Manchester is not CMO'C diocese, he is Westminster, which is London.

I am interested in the use of that term "herd immunity" in this context.

I do not think that we humans form a "herd"; our acting together to achieve something for the common good of all arises from a free choice on our part to do so, and public authorities who need that acting together for a particular purpose can rightly be expected to engage with that human freedom and not engage in coercion.

References to "herd" and "herd immunity" seem to me to deny the proper exercise of freedom in acting together that leads to genuinely human acting.

And in this case, as I note, it's quite a new vaccine, and there are still questions about its safety, so I think those concerns more than counterbalance the "herd immunity" benefits that might occur.

Hi, I have a blog: loveundefiled.blogspot.com and have this about HPV on it. many thanks, Robert Colquhoun.

Information regarding sexually transmitted diseases: The Human Papillomavirus
Amongst the proliferation of sexually transmitted diseases since the sexual revolution, Human papillomavirus (HPV) is the most common. There are more than one hundred different types of HPV, of which between thirty and forty types cause genital infections. Most people who contract the virus do not suffer any consequences or symptoms. It is both incurable but not permanent. However, it does cause 99.7% of cervical cancer. Cervical cancers kill approximately 288,000 women annually. According to the British Journal of Obstetrics and Gynecology, 46 percent of teenage girls acquire HPV from their first sexual relationship. The majority of sexually active women have been infected with one or more types of HPV.
It is clear that the safe sex message promoted by both the NHS and the government is ineffective in its attempt to prevent such a virus. Even virgins can get STDs, including oral cancer from HPV. Many people will contract this virus because they have wrongly been informed that they were engaging in ‘safe’ sex. The virus is spread from skin to skin contact throughout the entire genital area, including one’s thighs and lower abdomen. The National Cancer institute in America reported to congress that condoms are ineffective against HPV. Other reports have shown that condoms have little or no protection against HPV. HPV will normally clear on its own. However, when a husband is infected with it, his wife is five times as likely to get cervical cancer.
A recent advert in the cinema informed British moviegoers that “STDs are spreading fast - use a condom.” As oral sex can transmit virtually every type of STD, many young people today are being told lies about ‘safe’ sex. One can only hope, act and pray that the era of handing out contraceptives like sweets will come to an end. The attempt to protect yourself from someone you should be most intimate with is particularly absurd as it creates a chasm rather than true intimacy. This absurdity leads to the irony today that promiscuity can lead to infertility by catching certain STDs. The American college of obstetricians and gynaecologists have stated that the use of a condom does not provide reliable protection against herpes. There are no significant differences in catching Chlamydia between those who used condoms and those who didn’t. This can lead to infertility.
There is a way to protect yourself 100%: physically, emotionally and spiritually. This is called chastity. As unmarried relationships never improve as a result of sexual activity, chastity protects our relationships from dangerous consequences.