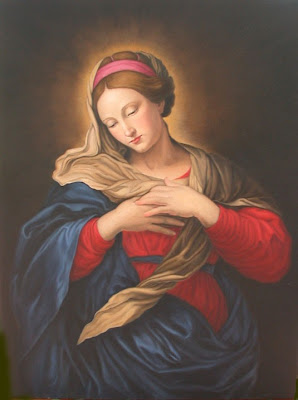 I am always a little skeptical about "measuring" the effects of prayer, or even suggesting it has a purpose other than worshipping the Almighty, as far as the following story is concerned I would be interested in meeting the Catholics, I mean what kind of Catholics are they? and I would want a look at the rest of the data. Faith should make us more questioning of such stories not less.
Howrah News: Researchers at the Oxford Centre For Science Of The Mind, in Oxford University, in a study published in the journal Pain, conducted an experiment with electric shocks on 12 Roman Catholics and 12 atheists as they studied a painting of the Virgin Mary.

The Catholics in the experiment seemed to be able to block out much of the pain as they were able to activate part of the brain associated with conditioning the experience of pain, reported the Mail on Sunday. The study also found that participants who had strong religious belief could moderate their pain by thinking about it more positively. The experiment was conducted as part of a series by the Oxford academics — scientists, philosophers and theologians. It involved strapping a sparking device on the back of every participant’s left hand to deliver an electric shock. They were also asked to contemplate two paintings, Italian painter Sassoferrato’s 17th century Virgin Annunciate (Virgin Mary) and Leonardo da Vinci’s 15th century Lady With An Ermine.

The participants were not told the true purpose of the experiment, only that it was designed to judge how people felt pain while contemplating pictures of different things. They were made to spend half-an-hour inside an MRI scanner, receiving a series of 20 electric shocks in four separate sessions while looking at either one of the paintings. The researchers hoped that the Virgin Mary painting would induce a religious state of mind in the believers and the da Vinci painting was chosen as it did not look dissimilar and would be calming. The researchers found that the Catholics felt "safe," "taken care of" and "clamed down and peaceful," said that looking at the painting of the Virgin Mary. They reported feeling 12 per cent less pain after viewing the religious image. 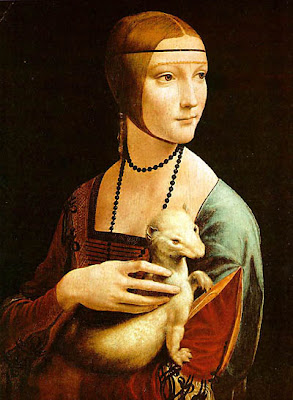 Mater Dolorosa, with respect to the 7 sorrows of Mary, what is pain?

I am not surprised. "Conversion" must be accompanied by neurological changes, probably involving a complete rewiring of the brain.

I'm not saying this is right Father but I can think of a couple of examples were it was true for me that I did not experience the pain others expected me to.

The first example was when I was practising jiu-jitsu and the master was demonstrating the use of pressure points to subdue an attacker. Pressure points when attacked are meant to result in enough pain to allow you to control a person but when tried on me the pain was minimal. Of course it could be that the Master was not quite getting the right spot but it worked fine on the others in the group an did it did ot on me until he resorted to brute force which is not meant to be necessary.

The second example is after some surgery I had performed, I was supplied with two different types of strong painkiller as the the medical staff expected me to experience quite a bit of pain for a while. Thankfully they were wrong and i only used the painkillers once or twice, this was definitely unusual as the nurses expressed there surprise on several occasions that I was not in pain.

Of course this is all circumstantial, an interesting idea though. After all when God gives us a cross to bear he also gives us the strength to carry it as long as we rely on Him and not on our own strength.

When I was being "educated" by Christian Brothers in the late 40,s & early 50,s I was probably the most prayerful person in the world but I did suffer plenty of pain.Not from the Brothers but by my contempararies who objected to my prayerfulness.

I've just gone through nearly four days of bad pain. I have pain every day but sometimes it's ...well, it's bad.
I find it much harder to pray -but I do find that if I make the effort, particularly with the rosary that it does help. I'm not sure it makes the pain less-but it makes coping with it much better.

I'm back nearly normal pain now (no Tramadol today yippee) and I am sure prayer has helped.

God surely does not send suffering to people; this is a Puritanical belief. If one were to hold to such a thing, that would make God rather capricious; then, we would also have the scandalous matter of God visiting suffering upon babies and children.

The destructive impact of sin leaves inevitable wounds not only in the sinner but also in the innocent victims such as children. The Christian response to the tragedy of sin and suffering arises from the personal experience of the power of Christ’s death and resurrection to heal the alienating, self-centred forces in our hearts. God-incarnate, totally innocent, completely loving and radically vulnerable suffered as though He were guilty. In this, He shows that He has identified with what we endure. Thus, we are not alone, for God is with us in our darkness. As John Paul II said in his letter ‘Salvifici Doloris’ “Christ through his own salvific suffering is very much present in every human suffering, and can act from within that suffering by the powers of his Spirit of truth, his consoling Spirit”.

Suffering is something which we all experience; we do not need to go looking for it to fall on us; it will make itself known. How we deal with it is crucial, so the results from the small Oxford study are not at all surprising. I remember having a very painful visit to the dentist when I was but a youth. As the dentist yanked away, I struggled mightily and my eyes filled with tears. Then, I remembered the voice of my primary school teacher, and offered my pain to ease the steps of a missionary in Africa. Immediately – and I do mean immediately – something happened. The pain did not abate in the slightest, but I was able to handle it, and became calm. The dentist later commented that the change was noticeable.

It is true that some people experience suffering more than others, and this is a mystery. Whilst I reject the Calvinistic concept that God sends suffering, I do believe that He does not allow anything to happen to us that we are unable to handle, with His grace. Perhaps this is why I have suffered so little in my life.