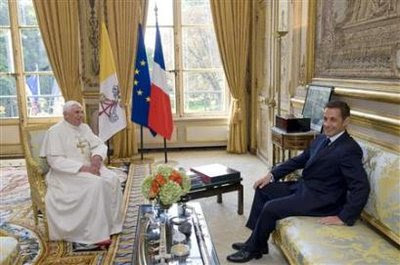 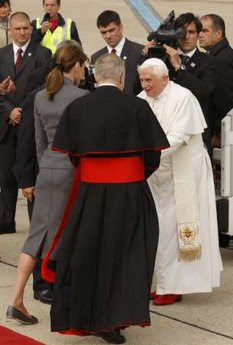 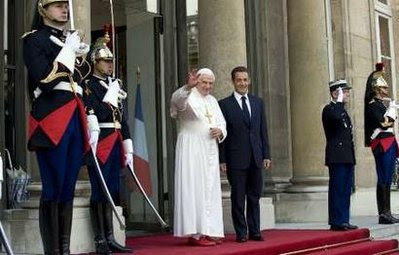 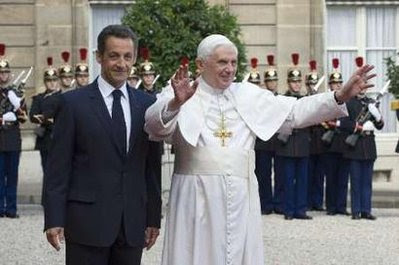 The Pope was met at Paris's Orly airport by President Nicolas Sarkozy and his wife, Carla Bruni.
During his four days in the country, the Pope will celebrate an open-air Mass in Paris and travel to the shrine of Lourdes.
In a country that has strict laws on secularism, Pope Benedict XVI is also due to give a speech about the role of religion in society.
"I love France, France's great culture, French art," he told reporters while on his way to Paris.
He said he was coming to France as a "messenger of peace and brotherhood".
at September 12, 2008

I hate to be pedantic, but 'en Paris' is not correct. 'In Paris' should be translated 'à Paris'.

It's great to see the Holy Father tell Sarkozy it's time for Christians to confront secularism!

Can't wait for that speech. It should be very interesting.

Interesting pictures. Presumably it's the Élysée Palace (the President's official residence), but the Pope looks perfectly comfortable in the setting whereas the President doesn't.

Perhaps it's just the President's modern clothes that clash, but it looks like something deeper.

I suspect it is more to do with the Pope's humble confidence in his mission that leaves him unfazed by the grandeur.