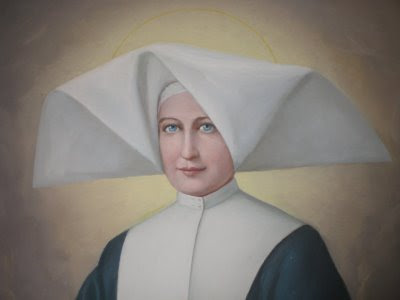 There are two posts on Orbis Catholicus, one in which John Sonnen typically calls for the restoration of the Vincentian's traditional habit.

I have to say just seeing pictures of that distinctive habit brought back one of my earliest childhood memories, and most probably first contacts with the Church.

I have a small scar on my chin, were when I was two or three I fell over and cut my chin open. I was taken to casualty for a few stitches, I remember seeing two nurses dressed in this extraordinary headgear and asking my mother why they were dressed like that, and being told they were nuns. I remember wanting to be treated by them, I wasn't, but I do remember being smiled at by one of them. 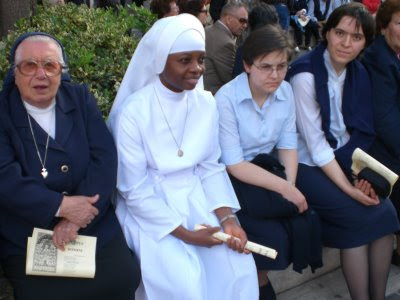 In the other post he compares and contrasts the smiling black sister in the white habit with those around her.
I know it irritates one or two people, but let's repeat it, habits (& cassocks) attract vocations,

I am sure there are lots of other good reasons for wearing both, help me to add to this list.

I still want to know how my third grade nun once pulled out an entire bed sheet from her sleeve to use to staunch my bloody nose. She did it just as well and as tenderly as my own mom. Nuns had some secrets going on. Seldom if ever was one crossed in a classroom. I had Franciscan nuns, Daughters of St. Paul (also with that extraordinary head gear (I did not envy sister for having to maintain that one, and was relieved for her thaT they went to a simpler veil, Sacred Heart nuns and sisters of the Carondelet.[sp!] 99% of them were nice, most wonderful, and only one clinker.

A 5'2" nun could keep perfect order in a class of 30 or more with no problem. "Because s'str SAID" was of far more import to us than "Rome has spoken." As far as we were concerned next to the pope she ruled our world. At least for kids 12 and under - you still didn't cross her when you were older,

I heard a story that the nuns at Rue De' Bac once tried to change the traditional habit of the body St. Catherine Laboure but that her body became so contorted that they couldn't get the original habit of her!

I couldn't agree more, Father. There's an interesting photograph in the current issue of the A&B News which is relevant to this. A case of 'spot the priest'. . .

I am amused by the last comment from gemoftheocean. I well remember suggesting to one of my sons that he leave his homework until the weekend - it was a Friday. 'No' he replied insistantly 'I must do it tonight as Sister says we must.' And he did too!

The kindly discipline my son received from Sister at primary school stood him in good stead as he is now in a profession where discipline is all important and could indeed mean the difference between life and death for him and his colleagues.

Whilst I agree with the return of more nun-like habits I cannot imagine the Vincentians returning to their cornettes - travelling on the Metro would be an impossibility! Before they were abolished (the headwear not the nuns!) I imagine that people stood by to let them pass out of respect for the habit. You could see them coming from a long way off so had no excuse. Sadly today it seems to be every man for himself.

Hi Father. The 1st picture reminds me of my youth too. But not for the same reasons. When I was young there was a TV show called "The Flying Nun". For me it was a great show. I think Sally Field played the nun.

I remember being so shocked, aged 10, on a school trip, when seeing a nun in her dressing gown (no wimple) coming down the hotel corridor to tell us off. Covering up gave the nuns a mystery and authority - a presence - that the other teachers did not automatically have. My mother remembered being shocked at the age of 12 on seeing that the headmistress had a toilet just off her office. It had never occurred to her that a nun would require such a thing!

Wouldn't care to sit behind a Vincentian at the cinema though....

The habit often makes ordinary lay people (the man in the street) stop
and THINK. Surely that is enough to make one hope for its return.

Perhaps on a more mundane level, the cassock is more comfortable than a clerical suit, at least I think so.

Habits and Casocks are a visible witness of an invisible reality. As others have stated, they make us stop and think.

I am discerning my Vocation, and I won't consider a community that doesn't wear a habit..unless, of course they are in China or missionaries in Orissa (where the habit would get them instantly killed in unspeakable ways without being able to do the work they're called to do). I recently met an ex-Sister of a local wacky Community that doesn't wear the habit; their argument is thus: their original intention was to blend with the people, and when they dispensed with the habit, it was a return to that. I understand this well. And I don't fault communities for not wearing them in dangerous places in the world where it would be counterproductive. Subversiveness is sometimes needed.

We NEED a visible witness. And that form of dress COMMANDS a certain recognition and respect, or in some cases, maybe an opposite reaction...and then we know who to pray for1

I know only a few priests who wear cassocks. One is a priest with whom I've never spoken, but stands as as beloved Father, unmistakably recognizable whenever I attend Mass there. The others I know are friends, and they are striking. Both are very dedicated priests and although we are good friends, that cassock reminds me of a special boundary, a sign of holiness, of being "set apart" that isn't conveyed as well in a black suit. The cassock has spiritual significance...not only the recognizable roman collar, but the "skirt" (sorry for the term!) that is CLEARLY sub-cultural! Anti-cultural1

And the other priest I've met who wears one is a Byzantine priest, and I'll admit he was a bit imposing and intimidating, but in speaking with him, part of what I perceived as "imposing" was really his holiness...embodied, for me, in the cassock he wore. (A most gracious person, he was).

Two of my best friends are nuns with beautiful habits (Sisters of Life and Nashville Dominicans). They attract people to them, people on the street (the Sisters of Life are asked to pose for pictures on the streets on NYC all the time) and young, discerning Catholic women. There is something remarkably beautiful about them, probably their joy, love and holiness, but it is not noted in religious who do not wear habits.
A rather worldly man I know once painted for the contemplative, whimple-wearing Sisters of St. John. He said, with great purity, that the most beautiful women he has ever seen were in that convent. The power of the habit!

gemoftheocean:
Are you sure she didn't pull it from her pocket.

A nun friend once let me into the secret of how she managed to carry so much about with her. (1962) Round her waist underneath the habit she wore a belt with two shopping bags slung at each pocket side. She had unstitched her bottom of her pockets for access to the bags. The unpicked pocket edges had of course been perfectly hemmed to avoid fraying.

The whole arrangement solved the proble of why from one day to the next, she seemed to lose and gain weight depending on how much was in the bags. It must have been quite a penance on 'heavy' days, particulrly in the heat of summer.

Fr. I agree with everything you say.

I was a lay teacher in a school run by the D.C.s on the day they first appeared in their new 'habit'. It was a traumatic experience for them, us, and for the children. An atmosphere of depression hung over the place for weeks until we all began to get used to it. I think probably at first the sisters themselves were glad only to have got rid of all that laundry work and starching.

I would love to see them bring back the cornette, at least when they are in chapel and at public Masses. I saw rank upon rank of them both at the Rue de Bac and at Mill Hill. Unforgettable!

Someone asked about the postulants' headgear. If I remember rightly, it was a sort of bonnet with broad white bands hanging down the front.

I too had heard the story of them trying to remove St Catherine's habit. Their failure was most delicious and satisfying to one who has always had devotion to this quiet saint of the Miraculous Medal.

Fr. Mark Lawler (I think that's his name) was considered divisive by his Bishop and told that he was no longer required in his parish.
One facet of his divisivness was that he used to walk around the streets of Allerton Bywater wearing a biretta and cassock. I don't really think that a biretta is intended for street wear but when I was a seminarian in Lisbon (I left by the way) we always went around the streets wearing a cassock.
I can still remember happening upon Portugal's President at that time, in the street.
He stopped, bowed and raised his hat. But then, he was well known as a devout, practicing Catholic.

Habits are inspiration...Kudos to all priests and nuns who wear their habits (or cassocks).

I've always believed that it's proportionate vocations and habits.

One time, I was in an airport food court, on my way to care for my sick parents. I was very distressed and worried and felt very alone. And then, who should walk over to a nearby table, but a young priest dressed in a cassock! He sat and crossed himself and blessed his food. He had such an air of peace and dignity about him. Just seeing him instantly put me at ease, cheered me up, and made me feel less alone. I think he was a God-send! :)