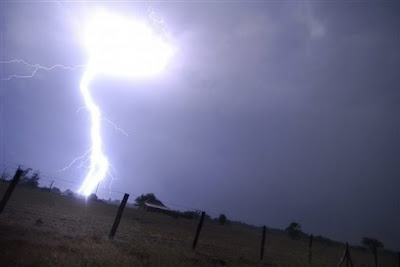 from American Papist
A Chinese man who swore to God that he didn't owe money to a neighbour was hit by lightning a minute later.
The man, named Xu, made the oath in front of a crowd of neighbours in Fuqing city, reports Southeast Express.
He vowed that he had never borrowed money from Mr Huang, who claimed Xu borrowed 500 yuan, the equivalent of £40, from him three years earlier.
"He borrowed 500 yuan three years ago from me for a friend's marriage gift, but he has denied it ever since then," said Huang, who went to Xu's home to demand payment.
"I told him that if he dared to swear to God that he didn't owe me the money, then I would waive his debt," said Huang.
Xu made the oath, but was suddenly struck by lightning a minute later.
He was immediately taken to hospital where doctors confirmed he had been hit by lightning. He is expected to make a full recovery. (Ananova)
at September 02, 2008

As Lee Trevino (who was struck by lightning once, if not twice, on the golf course) once remarked: "What you have to do is hold up a 2-iron. Even God can't hit a 2-iron!"

Of course golf clubs are probably in short supply in remote areas of China...

GOR -- LOL -- LT was such a great golfer. Once i went to a proam being played at Torrey Pines, and Lee was the most fun golfer to watch. Loved the crowds and had a great sense of humor.

There was a big fire at York Minster in 1984, a few hours after David Jenkins consecrated as bishop of Durham there. Thought to have been caused by lightning.

God should do that a little more often. Puts the fear of Him into people =)

It must have been shocking!

Our house was struck by lightning some years ago and several switches were blown right out of the wall. Luckily we had taken the precaution of removing plugs from TV etc but had left the fridge running. We had to buy a new fridge after that storm!

The strange thing was that we had always thought this would never happen as our house is very near a church which has a lightning conductor on its spire!

The church must have deflected the strike to your house I'm afraid.

Don't forget Jan 'Lightning boy' Michelini, production assistant on 'The Passion of the Christ' who was struck twice during the filming and lived to understand the sacrifice of Christ and the Eucharist more clearly.
More details if anyone wants them.