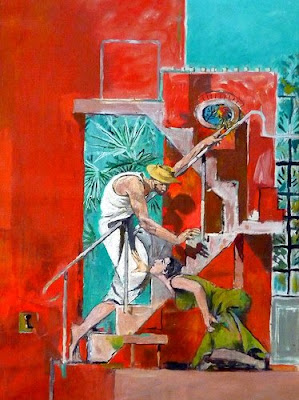 Read this Zenit story, I was struck by:


Archbishop Ravasi lamented that great architects are building modern Churches around the world, but the structures "are either naked [inside], as they have only the architecture of light, or images in poor taste, or only the presence of handicrafts and not, as in the past, great works of art."

Archbishop Ravasi wants Catholic art at the 2009 Venice Biennial, either in its own pavilion or displayed in churches.

He is right of course, but I really wonder, who are the great Christian artists of today? Indeed I have to ask whether there is an antipathy between Christianity and contemporary art.

Christianity, at least in its mainstream form, its Catholic form, is Incarnational: God becoming Man and dwelling amongst us. Modern Christian art, and here one only has to look at contemporary examples in European Cathedrals, is essentially abstract. It resists, even denies the Incarnation, it plays with light and formlessness, it can just cope with "God", even "God becoming", the difficulty is "God becoming Man". 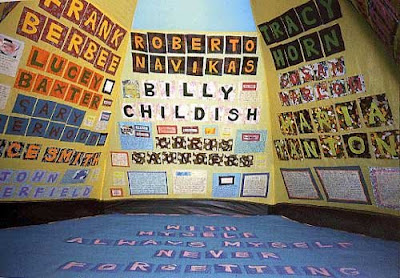 Contemporary art can shock, but normally by revealing the artist's brokenness. When I look at a work by Tracey Emin or Damien Hirst, I, (sorry) feel their pain, here is Emin's tent with the names of those she has "slept with" emblazoned on it. It is their sadness, rather than their work, that is being displayed, it a reflection on contemporary society: ostentatious self obsession meeting self-indulgent voyeurism, it is the tabloids or reality television in a dinner jacket.

In the past art was like prayer, it raised the mind and heart, I'd love to see some of it today. Even the oft praised tapestries of saints in Cardinal Mahoney's Cathedral have a pessimism about them, the same pessimistic deconstructionalism one sees in so much "religious" 20th century art.
at September 03, 2008

Wise words Father! The new mosaics representing the Five Luminous Mysteries on the facade of the Rosary Basilica in Lourdes are stunning. They are not abstract but representational and the artist, a Jesuit priest from Slovenia named Marko Ivan Rupnik, was inspired by Icons which go perfectly with the romano-byzantine facade.

This is a wonderful example of modern religious art at its best. When the sun strikes the gold leaf the effect is mesmerising and the figures tell their own story - they do not need to be explained. We have had enough of 'Modern' religious art - splodges and geometrics - which do nothing for the soul. We need 'Real' art in both decoration and music - we should not be ashamed of beauty.

You criticise contemporary art and draw a parallel with contemporary society, would you also include the Missal of the 20th century?

We have had 1/2 a million spent on yet another 1970's style reordering in our parish Church. I am struck by its sheer audacious vulgarity. What is interesting is that virtuous people approve of it and virtuous people were behind its inception. Then these same wonder why the pews are empty and all the sinners long since vanished from Sunday Mass.

Your Incarnation point is fascinating; I have never heard it before, but it makes sense.

However another problem is that Church art has to be public art - but today's art establishment seems to despise the public. Rather than produce art that reaches out to the people, artists are retreating into a "conversation" between a small group of initiates.

Pelerin, I'm sorry but if Rupnik's mosaics at Lourdes are the best we have, then things are really bad.

I have only seen pictures, not the real thing, and I'm sure that the sun striking the gold leaf is indeed "mesmerising", but any mosaic with lots of gold leaf would do that.

I am astonished that they are new; they already look dated (the style is early 1970s).

Look at the postures in which the figures stand; they are stilted, graceless, lifeless.

The facial expressions are ridiculous; in all of them Christ looks as if He has just remembered that He left the gas on when He left home.

Yes, let us have representational art rather than abstracts in our churches, and "we should not be ashamed of beauty". But this is not it.

Oh, and Father, you don't need the quotation marks around "slept with" when discussing Emin's tent. She has said in interviews that she used the term literally rather than euphemistically (the names include her grandmother).

It's still terrible art though!

What would be appropriate Christian architecture and art for now? Figurative is not plausible, and a Gothic or Classical revival style would be risible.

It is interesting that pelerin mentions mosaaics. What would not be risible would be the Byzantine idom nor not out of place in the contemporary context. And as an architectural style some kind of adaptation of an austere Romanesque, perhaps in brick and concrete, would be convincing and liturgically and acoustically effective.

Richard, I fear that the Novus Ordo Missal is indeed part of the Enlightment project to make all things rational. If you do not know already, you will find the biography of Cardinal Annebale Bugnini, author of the reforms is, "interesting".

The survival of the church depends on getting its liturgy back into shape. It is going to be a close-run thing

The incarnation and its implications for art are not lost on us evangelicals either, at least not all of us. You may be interested at some of the art I have collected at http://mattstone.blogs.com. I post it as conversation starters, so there is bad mixed with good, but there is hope.