No Room at American Rome Seminary

Fr Tim links to a blog called the Deacon's Bench, which reports that North American College has the highest number of seminarians that it has had in the last forty years. Many bishops like to have students in Rome but I am told this rise in numbers is reflected in many other US dioceses, I must say I am surprised, I would have thought the American sex abuse scandals would still have had a negative effect.

Maybe this rise is linked to Pope Benedict's visit in April but again I would have thought most vocations directors would have wanted more contact with a young man than a few months, though they do things faster in USA than here. I think that the cause is American bishops take vocations seriously, they actually ask men if they have considered being a priesthood. 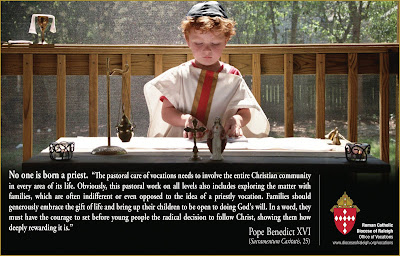 I have shown many American vocations videos and posters, they seem to encourage devotions and piety. I put up one beautiful New York diocesan video showing a Blessed Sacrament procession, with seminarians in clerical dress, and more recently of a boy about eight playing at Mass. I have even had some correspondence with young men in American Colleges considering. American bishops are teaching bishops, the newer generation are teaching from the Catechism. I can't help also thinking that in the US there is a greater variety of diocese, if you find your own "intolerably liberal", as one of my correspondents did, well there are always other bishops or diocese, prospective seminarians are willing to move.

Reading between the lines, I wonder whether one of the causes is the unpopularity of the Iraq war/invasion, it has tended to suggest that young men are capable of making life and death choices about their future, and that the priesthood is manly. The Theology of the Body, teaching on abortion and openness to life have a direct impact on the young, they are young people's issues.

I suspect too that many American Bishops take the morale of their clergy seriously, priests who are convinced of the supreme value of their sacramental ministry, tend to value and seek out vocations. In the UK too many priests tend to think they are going to be the last priest in their parish!

"the unpopularity of the war?" you're barking up the wrong tree. Only the sandalistas would say that here. Young men attracted to the priesthood in the US are much more likely to be politically conservative than hippies.

Must comer to the US, just to be a Sandalista.
You are right I haven't met anyone from the NAC who didn't support the invasion.

We wouldn't even call it an "invasion." Would you consider nailing the Germans on their soil in WWII as an invasion when Patton crossed the Rhine?

BTW, for what it's worth at a friend of mine's parish, they just sent off one member to the seminary this year, and there's a high school senior who wants to become a priest [he's an excellent server too] and a buddy of his wants to become a deacon.

OVERALL the prospects for increased vocations in the diocese are down (and we've got a real lame-o for a bishop in my not so humble opinion) - this guy is shell shocked.

HOWEVER seminaries which have rooted out stealth vocation killers (the touchy feely staff members who give poor evaluations re: "gay friendly" and lite-on-pro-life and "women should be priests too"] are thriving. Too many GOOD men have been turned away in the past.

OVerall we need priests not afraid to be role models. And I think a good spiritual foundation will nurture vocations.

I think ALL parishes should weekly pray for vocations in the prayer of the faithful. [You call them bidding prayers.] If you don't ask, you don't get.

So true! God bless you anyway, even if you did hit the tail end of the Sandalista generation. :-D

This is great news. As well as good men in our English seminaries, I've met a number of seminarians from the PNAC - all great men, encouraged by good bishops and priests in their vocations. They seem to be trained by priests who themselves are strong, loyal servants of the Church. The PNAC experience is, perhaps, an example to our English seminaries.

The number of vocations here in the US varies widely from diocese to diocese. In general, dioceses which have a strong, conservative, orthodox bishop (Lincoln, Nebraska and St. Louis Missouri, for example) tend to attract more vocations. In those dioceses seminaries are being expanded to cater to the numbers.

Other dioceses - such as mine here in Milwaukee - have closed their seminaries and what candidates they have (few and far between) are sent to seminaries in other dioceses or to those of religious orders. I attribute the dearth of vocations in Milwaukee not to our current Ab. Dolan, but to his predecessor Ab. Weakland and his 'circle' - among other factors.

The Scandal didn't help but I'd say the way many seminaries were run and the staff that ran them in recent decades contributed more to the lack of interest in the priesthood among young men - not to mention the loss of candidates who would have made good priests if the seminary atmosphere had not been subverted.

I wish I could like Uncle Sam a bit more and I certainly dont want to mess with him,but at present I find the pantywaist EU rather more congenial

gem ~ certainly traditional Catholics are not "pro" the War and Pat Buchanan is very good on this. American paleo-conservatives, in general, are also doubtful about US involvement overseas.

I would also say that if the USA withdrew from Europe, we Europeans would be back at war within a generation. Europhiles are in total denial about this.

Personally, I think the Americans should isolate and leave Europe to destroy itself - there being little difference between our aborting and contracepting ourselves out of existence and a full scale conflict. The latter might bring us to our senses however.

Thanks gem for the peace you guys have brought to us these last 60 or so years even though we didn't deserve it!

Sadie. right. I just hope democracy can take root in Iraq. Especially without a lot of biching and carping and backstabbing by certain EU nations - or rather corrupt politicians from EU nations.

Didn`t Pope John Paul summon Bush and Saddam (Tariq Aziz) to the Vatican and beg them not to go to war, shortly before er.. they went to war ?

I would be genuinely interested to know how Catholic Americans square that one. Possibly by saying JP2 was a hippy ? I don`t know.... Karen ?

You have to admit, it`s been a serious all-out disaster for everyone. Like Vietnam.

Or there are diocese like mine in LA which have virtually no vocations.

Bernadette, yeah, it would have been nice if the Iraqis stopped violating the cease fire agreement to Gulf I. You know, not violating all that no fly zone stuff they promised not to do but kept violating. Would have been nice if the freakin' French politicians would have stopped lining their own pockets with the oil for food money. Vietnam? Yeah, they did real well after uncle sam left. Demo Congress didn't give the south the aid they promised, the north ran over the south millions of boat people, millions into "re-education" camps. Pol Pot, the whole nine yards. the euros had wet dreams for years after that, and there's one segment of the US population that will forever hate another. I only have contempt for those who snatch defeat from the jaws of victory, and always will.

gem ~ I fear you are playing the neo-con card (as opposed to paleo-conservative) and my hope is that Palin might exert some influence on the administration if the Republicans win.

I agree with Buchanan that the Americans should get out of Iraq and isolate. This Trotskite obsession with spreading democracy is not the American way and runs counter to Washington not to meddle in foreign affairs.

This Bush administration is implementing the Hitchens agenda and not that of the founding fathers.

Sadie, I always hate when people use terms like neocon. You know not whereof you speak I was NEVER a freakin' liberal.

As far as anti-American values on the spread of democracy..why is it europe doesn't mind when we free THEM from dictators ... but democracy is over the head of anyone who's not "white?"

Karen ~ as Buchanan reminds us, WWII finished with more countries living under dictatorship than at the start.

The US intervention at the behest of liberals, Jews and the British during WWII was a tragic mistake from your point of view. You have never properly recovered form this error. It further condemed the Jewish people to the extermination camps something Pius XII understood better than anyone.

This obsession with spreading democracy has its origins in LIBERAL think-tanks not conservative ones. It's a Trotskyite strategy of which Hitchens would and DOES approve. George Washington understood that the USA needed to mind its own business.

Please understand me, the USA is the West's great hope: Palin rocks! Get out of Iraq, go home, fight the culture war in your own backyard - you can win it! Iraq will fail - what is the measure of success there anyway? A Starbucks on every corner and all the women dressed like Britney Spears?

Sadie, I hate to break it to you, but Pat Buchanan is an imbecile and knows as much about foreign policy as he does about bronco riding. In a ward: Bupkis. As to "what we got out of it" how about a free western europe, eventual freedom of most of eastern europe (and if that bleep Klinnichio hadn't have balled up his time in office and reached out more to Russia after it threw off the old regime - they'd be a lot better off too.)

You must be a genius. You're the first one I know who'll contend the US entered WWII at "Jewish behest." Silly me. I thought we started fighting (instead of just lending things) when the Japanese bombed Pearl Harbor. Lucky thing for you too.

That's some hooka you're smoking re: the Trotsky-Hitches connection.
I thought that stuff was illegal over there.

"Cultural wars" are harder to win than real ones.

As far as "A Starbucks on every corner and all the women dressed like Britney Spears?" goes ... it beats a rapist-son-of-Saddam on every corner chasing after the burqa clad.

Hitchens is a Trostkyite and worked in Cuba in the mid-60's.

Buchanan draws his inspiration from the founding fathers of your country as does Ron Paul and presumably Ms Chaplin.

A "Free Western Europe"? The cost was 50 million dead and the loss of the East to the Soviets. It was not free.

Charles Linberg got it right: the USA was driven in to a war that had nothing to do with her. If they had stayed out and forced the UK into a peace treaty, the Germans would have defeated the Soviets and not massacred the Jewish people to the extent that they did.

Please try be less offensive in your arguments and stick to reason.