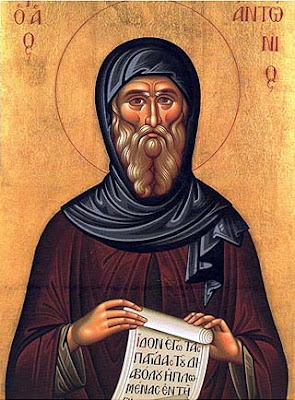 The word martyr means "witness", the first centuries of the Church were spattered red with the heroic blood of the martyrs, but when peace came to the Church there was still a need for heroic witness very soon the concept of "white" martyrdom developed.
This was a martyrdom without blood, without violent hatred of the faith. This white martyrdom consisted in a total offering to God a "dying" to self, to the world and its allurements. The age of martyrs melts into the age the early monks and hermits.
At the heart of it was was an interior war, the frontline was chaste celibacy united to an ardent desire to bend one's will to Christ's will. Saint Anthony of Egypt was the great exemplar of this new ascetic way. His twenty years of solitude in the tomb, fighting with his inner demons, was an invitation for many to follow him.
The word "monk" comes from "monachus" meaning alone. Denial of self and the gradual bending of one's mind by continuous prayer, were the tools of sanctification, yes, first celibacy and solitude, but also fasting and nights of sleeplessness. In Egypt especially, gradually these monks gathered together around an Abbas, a spiritual father, and little by little community life developed.
In and around the great melting-pot that was Alexandria especially, there seems to have been an interplay with other great religions. In outward appearance there seems to be little difference between the Christian monk and Hindu sadu, or Buddhist ascetic, both of these traditions were present in the city.
Here is a site of some of the sayings of the Desert Father, they are short and pithy as befits, the silent men of the desert
at September 27, 2008

"[It is white martyrdom for a man when he separates from everything that he loves for God, although he does not endure fasting and labor thereby. (1)]

The blue martyrdom is when through fasting and hard work they control their desires or struggle in penance and repentance.

The red martyrdom is when they endure a cross or destruction for Christ’s sake, as happened to the Apostles when they were persecuted the wicked and taught the law of God.

These three kinds of martyrdom take place in those people who repent well [blue], who control their desires [white], and who shed their blood [red] in fasting and labor for Christ’s sake." (St Columba, Cambrai Homily)

For the celts the white martyrdom was often voluntary exile from the homeland or monastery to undertake a missionary pilgrimage to a foreign land. Indeed evidence suggests that this is how Christianity reached Scotland with Ninian and Columba. There is a story that Columba settled in Iona because it was the first island he reached from which he could not see his beloved Ireland, even if he climbed to the highest point.

NB that 'blue' is sometimes translated as 'green'.

AN0NYMOUS: read the note above the comment box. "Use your real name, "Anonymous" comments are always rejected."

I have allowed this, because it is so interesting, I didn't know this about St Columba.

I think the above is as good a definition of the via media as I have ever seen.

Interesting article. I'll even give that webmaster a pass of optimizing for IE activeX.

I guess you can say it's a type of white martyrdom for those of us that are teaching the Truth of the Church in the face of opposition...we offer to God the Truth and we deny heresy and worldly philosophies.