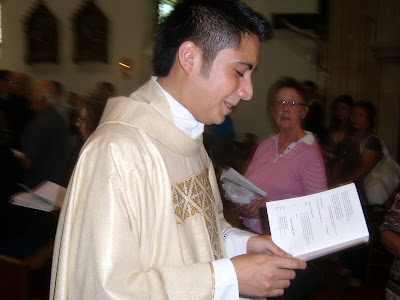 Father Aaron Spinelli came over today to offer a first Mass. Unfortunately I couldn't find my camera, this is a photograph I took on his ordination day.
Today he offered a votive Mass of the Martyrs, it was an occasion to bring our treasures, a red roman chasuble embroidered with the crucified on the back, an antique lace alb, a golden chalice decorated with diamonds, which is normally used just twice a year. I offered Father Aaron the option of celebrating either ad orientem or ad occidentum. He chose the former so we dressed the altar with our relics, including St Mary Magdalen, though Mass was in the Ordinary Form.
Rather than concelebrate I thought I would leave him to celebrate by himself, I knelt on the altar step, it was beautiful to see him offer Mass in such a recollected and prayerful way. He celebrated the Mass exactly according to the rubrics, saying the black and doing the red.
I felt a little like a proud older brother, I have always been impressed by him, I knew him before he went to the seminary, I have prayed for him, worried about him just a little and watched him grow in all kinds of virtue. Today I saw the result of God's grace as he offered the Most Holy Sacrifice of the Altar.
His sermon was well constructed; brief and to the point and worth saying but it is was the way he celebrated the Mass that was so edifying, he let the Mass itself speak. He did nothing to obscure that this was act of grace itself. It was a great privilege for me to have witnessed it, I pray he never looses the sense of awe he had today.
One thing that touched us both was an American reader of this blog, a retired priest sent a card and a cheque, for me it underlined the universality of this holy brotherhood of the priesthood that God in his great love has conferred on us.
After the Mass he gave his blessing to my people and I took him to see of them who is suffering from motor neurone disease. Keep Peter and Father Aaron in your prayers, and me and all priests too.
at September 10, 2008

Thanks be to God for good priests like Fr Aaron - and for yourself too Fr Ray.

Father, what relic do you have of St Mary Magdalen ?

Kind of you Cathy.
It is a tiny bone fragment.

I'm fascinated by the relic, Father. I'm especially surprised that the bones have not turned to dust by now. Do you have a history of the relic that gives you a pretty good assurance of its authenticity? And how does a parish acquire such a relic?

Is the relic on general display if I were to visit your church some time Father? (Sorry to be asking so many questions!)

Cathy all we have are the certificate and the customary seal, both are issued from the Bishop of Vézelay, where her major relic is.
We keep all our relics on the sanctuary.
Relics nowadays are given same liturgical honour as a image or a statue, which is a way of saying that they unite us in the same way as an image to saint, which gets the Church around the rather tricky business of verification.

Thank you Father. I haven't heard of Vezelay before, but having just found where it is on the map realise I have gone near it frequently, so I hope to call in next time I am in France. I also just found some interesting information about it here: http://www.sacred-destinations.com/france/vezelay-basilica.htm

I learn a lot from you blog. Thank you!

A good history of the Basilica of Ste. Madeleine, Vezelay, is "Vezelay : The great Romanesque church" by Veronique Rouchon-Mouilleron. The English language version was first published by Harry N. Abrams, New York in 1999.