How the young see "my contemporary" 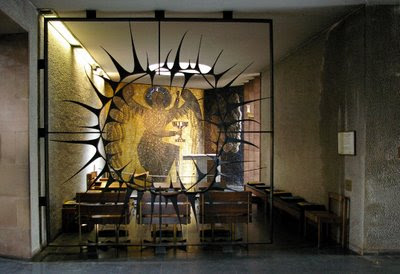 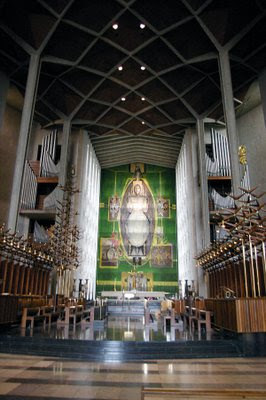 Joee Bloggs who is now in Washington doing something exciting with his summer vacation has some interesting pictures and comments on Coventry Cathedral. I remember its opening on television when I was a child. I remember being bored!
I also remember fighting with my older brother the evening afterwards because I wanted to listen to the premiere of Britten's War Requiem, which was written for its opening.
I also remember it being heralded as an amazing temple of the age of "white hot technology", it is interesting to see how dated it now seems to young Joee, he's a not uncultured medical student. The great Graham Sutherland tapestry, which was regarded as so stunning and such an important piece of contemporary work has lost its impact, Joee says nothing about it, this is his conclusion:

As far as I could see, Coventry Cathedral was an interesting piece of architecture, which is overly experimental in its design. Too much of the past which has worked was thrown away in a bid to be bold and daring. The result is a building which does not lend itself to prayer but to curiosity rather like a museum or art gallery. In fact 50 years on, much of the architecture looks tired and dated - rather blocky, concrete and jagged. Thus sadly, my overall impression was of a building which was more of an art gallery of modern art than a Cathedral.

I grew up in Guildford which had the other postwar Anglican Cathedral, we always considered it dull compared to Coventry.

Both the Britten and the cathedral are so dated. But what were the composer and the architect to have done in the late 1950s? Give them another 30 years and they will be properly evaluated.

Interesting recording with Slava conducting the LSO. Some of the players featured are still there!