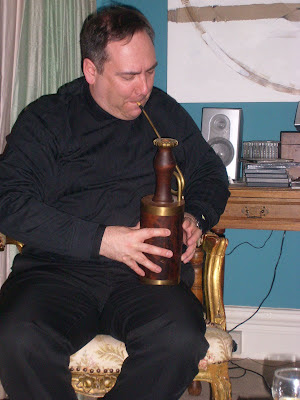 Did you know Fr Zuhlsdorf was racketeer? Here is the evidence. What he is blowing is actually a baroque pocket bassoon, a ranket, a racket, it has been sitting around my house unplayed for years. So whilst tens of thousands eagerly await the next posting of What Does the Prayer Really Say the author attempts the racket! As a talented flautist and oboe player - well ducks and water.

We talked last night about conversion and the importance for him of music in that process when in his twenties he became involved in the musical life of St Agnes in Minnesota, I could identify with that I remember hearing the Mozart Requiem for the first time as a child and being thrilled by the terror and sheer beauty of the music and just thinking somehow I wanted some of that, I mean I wanted to share in the faith that could inspire music like that. Beauty somehow calls something out of man, it speaks both to his intellect but also to his emotions, it invites from him a response. The man unable to respond, is brutish. Some parts of the media, and government talk alot today about how people can know a lot about the arts but little about the sciences, but the arts speak to the soul.

I know of an astro-physicist who have been inspired gazing at the heavens, others by the logiocal beauty of mathematics or the interplay of ideas or even chemicals but this actually, I think, an appeal to sense of beauty.
Beauty speaks. When I read the lives of the saints as a young man, again it was the beauty of their lives that spoke to me, stories of heroism, even of the human capacity to suffer speak of the magnanimity of the human spirit.
Friendship, conviviality are part of this too.
I shall miss Fr Z, hope he returns soon.
at February 05, 2008

Such a brave young man was Fr Jerzy P (can't spell the rest) a post on my blog..he was martyred at age 39..i'm wondering if us Brummies might make the Oxford blogfest..

First, Fr. Tim fantasised about wearing a Hawaian shirt.
Then I read that the Pope drinks fizzy orange.
Now I learn that Fr. Z is a flautist.

These revelations have left me shaken.

Fortunately, Fr. Ray lifts this post onto a higher plain :

These are indeed things to ponder.

I am taking Fr. Ray's comments about sacred music to heart and am going to listen to Faure's Requiem.

Glad Fr. Z enjoyed his visit. Fr. Ray of course would have been a perfect host, and Fr. Z, I imagine, was a very entertaining guest.

And there's me thinking Fr Z was smoking a hookah!

Great posting ! has anything so wonderful ever been written for the trombone than the solo of the Requiem's Tuba Mirum ? - the first time I heard it is one of my strongest musical memories.....beautiful !

Yes music certainly stirs the emotions. I have just watched a 26 minute film on the origins of Gregorian chant. There are some beautiful examples shown sung by both professional singers as well as choirs of brothers and nuns. The latter actually looked like nuns too in traditional habits!

One of the nuns talks about being spiritually moved by music.

The film can be found on the 'jourduseigneur' site - in the section 'histoire' - entitled 'enquete sur le chant gregorien.' It is, however, in French although of course music is itself an international language. The ancient documents shown are remarkably complicated for the lay singer to read but there seems to be a renewed interest in bringing it to the attention of the public today as this film shows.