The Story of Claude Newman's Conversion 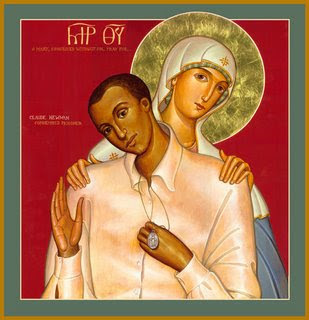 Mississippi 1944 :Claude Newman was a black man who worked the fields for a landowner. He had married when he was 17 years old to a woman of the same age. One day, two years later, he was out plowing the fields. Another worker ran to tell Claude that his wife was screaming from the house. Immediately Claude ran into his house and found a man attacking his wife. Claude saw red, grabbed an axe and split the man's head open. When they rolled the man over, they discovered that it was the favorite employee of the landowner for whom Claude worked. Claude was arrested. He was later sentenced for murder and condemned to die in the electric chair.
read the rest here
at February 20, 2008

What a truly amazing story!

What a deeply moving account - I have never heard of Claude Newman before and am so grateful you pointed us to the full details on the other blog.

There is much to learn from this and I shall be returning to it later to ponder on it again. Thank you, Father for another deeper insight into our Faith.

PS. I see that there are many sites recounting the life of Claude Newman. As I am still housebound it is a good excuse to surf some of them as this story is so inspiring.

The way it's written without full names and places had me curious. There's a bit more detail HERE.

Thanks Jeffrey - really interesting. I find it also interesting that it is only the Catholic Faith that has instances of miracles and miraculous apparitions with great messages for remaining faithful to Jesus.
I mean, has mohammed appeared to any of his faithful over the centuries, ever? Have any of the other 'gods' of any religion? No, I guess not. These countless incidents from the great apparitions of Lourdes and Fatima as well as countless visions documented by the Saints to this hugely inspiring story of Claude is yet another reminder why it just seems to me to be so dumb to believe in any other way to eternal salvation other than the Catholic Faith. Perhaps I'm just too simple minded - Deo Gratias.

Thanks for this story! I'm very moved.