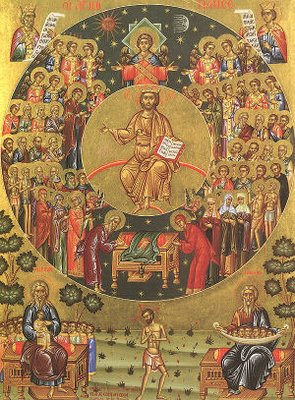 The doorbell rang. “Trick or treat?” yelled two little seven year olds dressed as witches. I feigned horror at their ugliness, I think I might have said something about them being smelly, adding various little insults, rather enjoying myself. “What’s the trick?” I asked.
“We will put a spell on you.” They said.
I said, “I’ll sprinkle you with Holy Water and you’ll disappear.”
“We will come back as ghosts and haunt you”, they said.
I didn’t say, “Well if that is want you want then you will go to hell for all eternity.” I was tempted, but then I thought “child protection”. So I just said, “That can’t happen because I will pray for your soul”.
Anyhow I eventually went and found two plastic Rosaries, I think they thought they were necklaces, we said a Hail Mary and they left saying something about sweets or money.
I, being a party pooper, phoned their mum, who lives around the corner to ask if she thought they would be safe door knocking after dark.

Hallow’een is a pretty new phenomena in the South East of England, one of those vulgar North American bits of culture. A friend of mine disapproves of it so much he organises a party where children and helpers come as saints and angels. It is perhaps another sign of the disappearance of religion, I am sure that those who do “Hallows even” know very little or nothing about “All Hallows day”.

My home schooling American friends, live in an area where Halloween is big, preparation for it seems to go on for weeks, they use it to talk about the intercession of the saints, the power of Christ to overcome evil, the use of Holy Water. Rob jnr apparently had a plan to fill his super seismic mega water pistol with Holy Water and “blast those evil kids”, a bit over the top, maybe a bit American, in England we might worried. Instead his parents suggest that what the family might do is put statues and pictures of the saints in all the windows with candles around them. The children paint pictures of their patron saints on tracing paper to put up as stained glass. The pumpkin lantern, rather than having a ghoulish face has crosses cut in it and will stay throughout November for the Holy Souls, for their friends who come calling there are Miraculous Medals on tasteful cords, and apple bobbing, which has a bit of baptismal catechesis and there are cruciform cookies.
at October 31, 2006

Thanks for your interesting comments about Hallowe'en. Here in New Zealand it's not very big but commercially has started to become so. Our children enjoy the part about dressing up, so I let them. Tonight my son was Marge Simpson from The Simpsons (I have a blue tall wig) and my daughter had a monster mask and a cape as well as an owl on a stick. They visited two neighbours and got lollies. We then drove to see my mum who likes to see their costumes. On the way, stopped in to see the school principal who said she didn't approve of Hallowe'en but would give the children a few lollies anyway since she knew them. At my friend's house, after that, they had a sign on the door written by her son "No trickle treaters". My son came back and relayed the message. As we were leaving, they saw it was us and rushed out to see the costumes, had a laugh and gave the chn chocolate. My friend said she's against it because "we bring our children up to be wary of taking lollies from strangers. Then suddenly we're saying on this one night of the year you can go to visit strangers and ask for lollies". I agree, that is weird. For me, it's half an hour of fun dressing up and getting a few lollies once a year. I understand the moral and religious stance against it, and definitely don't suggest the chn participate. However, if they want to dress up, organise it themselves and only go with me to people they know, I feel okay about it for now. But I'm glad I don't live in the US where it's so infused into the culture for some reason. Just thought I'd share that with you. I liked the way you coped with your "trickle treaters!"

We used to make cookies our of stiff shortbread pstry and press St Benedict medals into them.