A Catholic Head of Music on Catholic Music 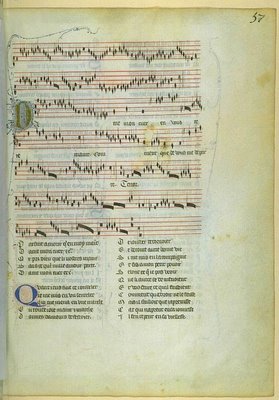 I thought this was such a good comment and one that I totally agree with, I didn't want anyone to miss it.
There is a very beautiful celebration of Mass by the Pope 20th April 2005, day after his election on the sidebar link to the Vatican Video Archive, a single cantor sings the entrance antiphon, the rest of the proper of the Mass and the Cardinals join in the Ordinary, it is very austere, very prayerful and deeply moving. I also think it is how Mass should be celebrated.

Anonymous said...
I've often wondered why we sing hymns at all at Mass when composers in the past set the five sections of the Ordinary and way back the "Ite missa est' too. Mozart, Haydn, Beethoven, Schubert, Dvorak are not famous hymn writers though they all wrote Mass settings and motets. The hymns we have serve no purpose than to fill up bits of the Mass when we could have some silence with a whole pile of extra words - don't we have enough to dwell on?! (A bit radical. I suggested this to a friend and she did look a bit shocked.)

Four part strophic hymns are as far as I can see a Lutheran invention and though the Chorales by Bach provide an excellent vehicle for Music students to learn the fundamentals of harmony ( if only the modern hymn writers had studied them....)they aren't exactly Catholic. We don't take passages from the services of other Christian denominations into the Mass, so why take the music?

Also, for example, modern settings of the Gloria in English, tend to turn it into a verse chorus form when again composers in the past set the words without doing this. Surely, if we were supposed to keep repeating the opening as a refrain, then the text would have been passed down to us in that form? There seems to be a free for all with texts that should presumably be treated with the utmost care and devotion.

Plainsong has so many remarkable attributes; passed down a millennia in notated form and definitely before that as an oral tradition, no named composers so no egos involved, woven into the fabric of medieval, renaissance and later polyphony, the melodies worn smooth by the centuries, restricted vocal range making it easy to sing .... and that's before you consider anything to do with its rightness for the liturgy.

I'm very tempted to give a monster rant on the thankless task of being the Head of Music in a Catholic school and what it's like having to play all the grating rubbish, knowing that Catholic Sacred Music is truly the best music created by western man .... but that isn't really the point. (Yes, I did try to do 'proper music,' no it was not particularly welcomed.) A great deal of the music used in schools and parishes doesn't do the job. It isn't devotional, it is very poor quality (that's the music, not how it is played,)and I don't blame people for not singing. Maybe congregations want some silence to pray. If you only go to Mass on Sunday, why would you want to sing some trite Communion hymn when you've got 5/10 precious minutes to say your prayers? Maybe the folks in the pews know instinctively what you are articulating, Father.
at October 10, 2006

Email ThisBlogThis!Share to TwitterShare to FacebookShare to Pinterest
Labels: music

I found the above link on Fr Tim Finnigan's website - it's worth checking out!

Just because you have a personal preference for a certain style of music Father, which is elitist, western and dated, why should everyone else have to put up with it?

Surely the point of Father's preference is just that it isn't elitist or dated? And as far as being western, isn't it the traditional music of the Church that he likes? Personally, I'd much rather have that than 3rd rate rather trashy hymns, let alone guitars, pan pipes and drums.

Oh dear, Maud. I wonder if your views are typical of many parishioners? I do hope not.

I am a little embarrassed that my comment got promoted, but thankyou. Hope my polemic doesn't upset anyone.

I want to avoid the joke that goes; What's the difference between an organist and a terrorist? You can negotiate with a terrorist.

Just to clarify. I was trying to avoid the 'my favourite hymn,' 'my worst hymn,' approach to liturgical music and consider why we have it and what it should do. I've read pages of such stuff on other (American)blogs and though some of it is funny it can get a bit nasty and it is down to individual taste. Obviously, some people do like music that other people dislike and there needs to be scope for it all to be sung somewhere. Also, we get attached to the music at Mass, which why it's so important we get attached to it because it's doing the right thing. Music's powerful stuff and needs to be treated with care. I play lots of music I don't like myself on the basis that other people do like it and I hope they never guess. (A friend of mine says of such things - a bit penitential - when I mention anything I don't like.)

I also play in the Folk Choir ( a Palestrina free zone, be assured,)at Church because the people are fantastic, kind, warm people it's the best thing I've ever been in in a Church. But the reason it's so great is primarily because the people are such devoted Catholics in addition to being very good musicians. (The Parish Priest is great too, but that's another story.)As I said yesterday, it's not the people playing, or how they play the stuff, it's what we play, when we play and why we play, which can distract from the Mass.

The phatmass approach sounds excellent. Let's have rap, other types of music, dance, poetry, art, drama, film .... build the civilisation of love as JPII said, but just consider what is appropriate where.

The present Pope really knows his stuff about music and of course his brother is a professional musician, so great things are sure to happen.

The end. Any more and I'll have to start my own blog! Happy singing everyone.

As I am not quite sure what Father's musical preference actually is, nor even if he has one, I couldn't possibly say if it is elitist, western or dated. However, Gregorian Chant is eastern in origin and is not even specifically Christian. The same music is used in the Jewish synagogue and there are closely related forms of music used in the African church and in mosques. So it is not "Western".

As for it being "dated", actually, it is not. Some compositions were in use by the time it was written down in the eleventh century, others are seventeeth century and some are quite new. So it is anything but "dated" but spans a period of more than 2000 years.

As for it being elitist, in what way is it elitist? It does not require particular vocal gifts as most chants cover a small range of just an octave. It is all in unison, without harmony, so that makes it easy. There are some chants that anyone can sing, which is more than can be said of a lot of hymns, especially modern ones with awkward tonality which makes the tunes difficult to remember.

Four-part polyphonic music is not dated either, as people have been writing it for the past five hundred years and still are. It is "elitist" in that it requires a competent group of singers to perform. But most people who come to church seem to like it and concerts where this type of music is performed are well attended, which suggests it is quite popular.

I wonder what music Maud would think was not "elitist, western and dated"?