A Victim of the Confessional 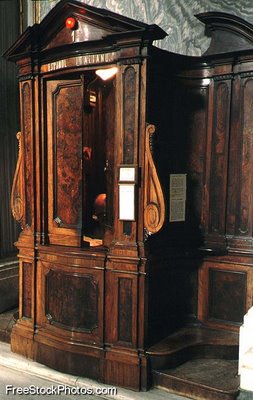 A true story: When I was first ordained, about twenty years ago my parish priest told me about how when he was first ordained he went on retreat to a convent he asked an old priest, who said mass for the nuns, and lived at the convent to hear his confession. The priest started to visibly sweat, saying "No, no, I never hear any one's confession, never, never ever!". When asked why he refused to answer and literally scurried away. My parish asked another priest why this man should behave so strangely.
He had been a chaplain or teacher at a school and had punished a small group of boys, who in order to get even, claimed that he had made improper suggestion to them in the confessional. They wrote to the Archbishop, who immediately suspended the priest from any public ministry, whatever, including saying Mass, the Archbishop kindly did no throw him onto the streets, but he was unable even to go to Holy Communion, or attend Mass in a public church or chapel. Because he was bound by the seal of confession, he was unable to defend himself or even offer any explanation, meekly he had to accept his punishment. It was over twenty years later one of the boys went to confession and told his confessor about the incident, he was told to write to the Archbishop and tell the full story, it was only then that this priest was allowed to say Mass.
at October 03, 2006

As a priest, I really do dislike open confessionals. You get drunks who threaten you, or the mad who will never leave.
Give me a box any time.

That is an appalling story. The poor man. Do you think the BBC would take up his story?

It is an appalling story but also one of great heroism.

What a very sad story. However, tales like this aren't 'newsworthy' so it's unlikely that the BBC or other channels would ever do a programme on this - the media only seem interested in the scandals.

I am a teacher, I can think of severalof my colleagues who had allegations made against them, They were suspended pending an investigation but even when these allegations were found to be malicious, it was impossibl;e for them to work again.

It reminds me of St Anthony, who on being accused of having an illicit affair with a girl bade silence before his accusers, until finally she confessed that she had fabricated the entire story. I don't think he held his breath for that long though!