Pope: one can testify to faith without sensational works 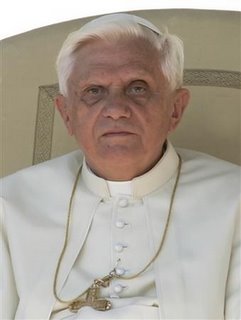 (AsiaNews)
At the general audience, Benedict XVI illustrated the figure of St Bartholomew. "Our knowledge of Jesus needs above all a living experience."

One can testify to faith without realising sensational works, but personal involvement is needed. The teaching delivered by Benedict XVI today, during the first general audience since his return from Castel Gandolfo, was entirely spiritual, dedicated to the apostle "Nathaniel-Bartholomew".
Multi-coloured umbrellas covered a crowd of 40,000 people in St Peter’s Square on a day marked by some rain and slight hoarseness for Benedict XVI, who was smiling and appeared to be in good shape.
Continuing his portrayal of those who were closest to Jesus, the pope said: "The figure of St Bartholomew, notwithstanding the scarcity of information about him, stands before us to tell us that adhesion to Christ can be lived and testified to even without the realisation of sensational works. It is Jesus himself who is and remains extraordinary; we are all called to consecrate our life and death to him."
Benedict XVI recalled the depiction of Bartholomew in the Last Judgement in the Sistine Chapel, with skin in hand. From the story of Bartholomew, the pope suggested two fundamental pointers. One is that "freedom of God surprises our expectations, by being found right where we did not expect it" and the other is that "in our relationship with Jesus, we should not content ourselves with words". As revealed by the words of Philip to Nathaniel, "come and see", said Pope Ratzinger, "our knowledge of Jesus needs above all a living experience. The witness of someone is certainly important because it starts with the announcement that reaches us through one or more witnesses, but then we ourselves must become involved in a more personal relationship." And one should never "lose sight of neither one nor the other" of the divine and human dimensions of Jesus. "If we proclaimed only the heavenly dimension of Jesus, we would risk making him an ethereal and evanescent being and on the contrary, if we only recognised his collocation in history, we would end up by neglecting his divine dimension which is actually what qualifies him."
Before the audience, the pope blessed, at the foundation of the Basilica of St Peter, a statue dedicated to St Genoveffa Torres Morales
at October 04, 2006