John Allen on the Pope, Jihad and an alliance with Islam 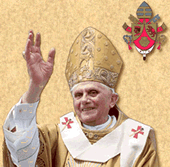 John Allen has a very interesting comment on what might be the Pope's message in Turkey next month he compares the writing of the Pope and Sayyid Qutb, the radical Islamicist, hanged by Nasser in 1966.

Ever since the announcement of the Apostolic visit the ecumenical and interfaith dimensions have been very significant, I believe he regards it as the highpoint of his Papacy so far. Ardent Vatican watchers are aware that from the very beginning of his Papacy the relationship with Orthodoxy have been important but maybe the relationship and dialogue with Islam has been underestimated. Allen continually regards the Pope's words on Islam at Regensburg as a mistake or an error, I think they were really quite deliberate to lance the boil of violence, in order to speak about what Christianity and Islam have in common. First of all it is that man is not "homo faber", an industrial cog, a mere consumer under the illusion of secular western culture.

Sandro Magister has an a very useful piecen on dialogue.